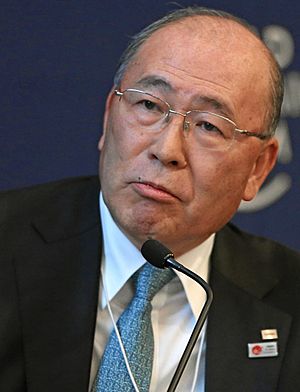 Atsutoshi Nishida (西田厚聰code: ja is deprecated , Nishida Atsutoshi, 29 December 1943 – 8 December 2017) was a Japanese business executive. He began working at Toshiba in 1975. He served as president of Toshiba from 2005 to 2009. He was born in Mie Prefecture. He studied at Waseda University and the University of Tokyo.

All content from Kiddle encyclopedia articles (including the article images and facts) can be freely used under Attribution-ShareAlike license, unless stated otherwise. Cite this article:
Atsutoshi Nishida Facts for Kids. Kiddle Encyclopedia.