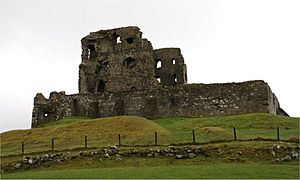 Auchindoun Castle is a 15th-century L-Plan tower castle located in Auchindoun near Dufftown in Banffshire, Scotland.

While there is evidence of prehistoric or Pictish earthworks in the grounds of the castle, the remains most visible today are of the castle constructed in the mid-15th century. This building is sometimes said to be the work of Robert Cochrane, a favourite of James III. It passed to the Clan Ogilvy in 1489 and from them to the Clan Gordon in 1535.

The castle was damaged by the Clan MacKintosh in 1592 in retaliation for the Earl of Huntly's killing of the Bonny Earl O'Moray, their ally. In March 1593 Patrick Gordon of Auchindoun was forfeited as a rebel, and Auchindoun Castle was given to Sir George Home, whose wife Elizabeth Gordon was Patrick Gordon's stepdaughter.

After the battle of Glenlivet in October 1594 the wounded followers of the Earl of Huntly came to Auchindoun for safety. James VI ordered that Auchindoun, Slains Castle, Huntly Castle, and the Gordon castles of Abergeldy and Newton should be slighted or demolished.

Following the Restoration of Charles II, the castle was again awarded to the Marquis of Huntly.

In 1689, during the first Jacobite rising, the castle was used as a temporary headquarters (on 6–7 June 1689) by John Graham, 1st Viscount Dundee and his Jacobite army. However, the castle was derelict by 1725. Stones taken from the castle were used in local farm buildings and nearby Balvenie Castle.

While standing, the castle had a large central tower and high curtain wall. Supporting buildings including a stable, brewery and bakery stood inside the wall. A second round tower guarded the northwest corner of the compound. Cellars and possibly dungeons were dug directly into the bedrock beneath the tower. Today much of the curtain wall and some of the outbuildings remain, but the central tower itself is very dilapidated.

An extension is known to have been added in the 16th century by the Gordons before the Ogilvys reclaimed it in 1594. Stones taken from the castle have been used in local farm buildings and nearby Balvenie Castle.

The ruins of the castle are in the care of Historic Environment Scotland as a scheduled monument, but were for many years in too dangerous a condition to be open to the public. On the completion of consolidation works, Auchindoun was re-opened for public viewing in November 2007.

"The Burning of Auchindoun" song

The sacking of Auchindoun by the Clan MacKintosh inspired a traditional song, "The Burning of Auchindoun" (lyrics courtesy of the Digital Tradition Folk Music Database), Child Ballad 183, "Willie MacIntosh":

As A cam in by Fiddichside, on a May mornin
A spied Willie MacIntosh an oor before the dawnin

Heid me or hang me, that shall never fear me
A'll burn Auchindoun tho' the life leave me

As A cam in bi Fiddichside on a May mornin
Auchindoun was in a bleeze, an hour before the dawning

Crawing, crawing, for a' your crouse crawin'
Ye burnt yer crop an tint your wings an oor before the dawnin

All content from Kiddle encyclopedia articles (including the article images and facts) can be freely used under Attribution-ShareAlike license, unless stated otherwise. Cite this article:
Auchindoun Castle Facts for Kids. Kiddle Encyclopedia.