Dufftown (Scottish Gaelic: Baile Bhainidh) is a burgh in Moray, Scotland. While the town is part of the historic Mortlach parish, the town was established and laid out in the early 19th century as part of a planned new town settlement. The town has several listed 19th century buildings and serves as a regional centre for agriculture, tourism and services. The town is well known for its whisky based economy, as it produces more whisky than any other town in Scotland and is home to several existing and former distilleries.

The Diocese of Mortlach was one of Scotland's 13 medieval bishoprics. The names of four bishops of the see are known:

Today, the Diocese of Mortlach, under its Latin name of Murthlacum, is a titular see of the Catholic Church.

Dufftown has an oceanic climate typical of Northern Scotland, characterised by relatively mild, damp winters and cool cloudy summers. The area averages 76 air frosts a year. Like much of Europe, Dufftown's climate is insulated somewhat by the Gulf Stream, a warm ocean current originating near the gulf of Mexico. This warm ocean current makes Dufftown's climate significantly milder during the winter than expected for its latitude.

According to the third film in the Harry Potter series, Harry Potter and the Prisoner of Azkaban, Hogwarts, the main setting of the series, is said to be close to Dufftown in an article of the Daily Prophet. 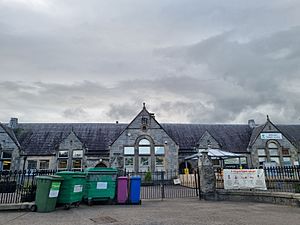 Mortlach Primary School provides education to primary school age children in the town. The school was built in 1902 and was originally the parish school serving Mortlach.

Dufftown does not have its own secondary school, the nearest is Speyside High School in Aberlour.

The primary road through the town is the A941 (the north/south portion is locally named Balvenie St and the east portion is named Fife Street). The A941 bisects the town and meets the B9009 at the clock tower junction, where another road, Church St heads to Mortlach Parish Church.

All content from Kiddle encyclopedia articles (including the article images and facts) can be freely used under Attribution-ShareAlike license, unless stated otherwise. Cite this article:
Dufftown Facts for Kids. Kiddle Encyclopedia.