August Ferdinand Möbius (17th November 1790 - 26th Sepember 1868) was a German astronomer and mathematician, who taught at the University of Leipzig. He wrote several articles on geometry and astronomy. He introduced concepts such as homogeneous coordinates, or that of Duality in Projective Geometry. He is also seen as one of the fathers of topology, in which his most famous creation is the Möbius strip.

Möbius was born in Schulpforta, Saxony-Anhalt, and was descended on his mother's side from religious reformer Martin Luther. He was home-schooled until he was 13, when he attended the College in Schulpforta in 1803, and studied there, graduating in 1809. He then enrolled at the University of Leipzig, where he studied astronomy under the mathematician and astronomer Karl Mollweide. In 1813, he began to study astronomy under the mathematically inclined professor Carl Friedrich Gauss at the University of Göttingen, while Gauss was the director of the Göttingen Observatory. From there, he went to study with Carl Gauss's instructor, Johann Pfaff, at the University of Halle, where he completed his doctoral thesis The occultation of fixed stars in 1815. In 1816, he was appointed as Extraordinary Professor to the "chair of astronomy and higher mechanics" at the University of Leipzig. Möbius died in Leipzig in 1868 at the age of 77. His son Theodor was a noted philologist. 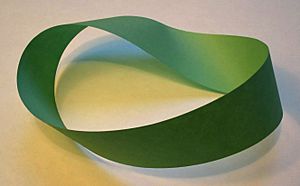 A Möbius strip or Möbius band is a topological object that only has one side. It is named after August Ferdinand Möbius

He is best known for his discovery of the Möbius strip, a two-dimensional surface with only one side. It was independently discovered by Johann Benedict Listing a few months earlier. The Möbius configuration, formed by two mutually inscribed tetrahedra, is also named after him. Möbius was the first to introduce homogeneous coordinates into projective geometry. He is recognized for the introduction of the Barycentric coordinate system.

All content from Kiddle encyclopedia articles (including the article images and facts) can be freely used under Attribution-ShareAlike license, unless stated otherwise. Cite this article:
August Ferdinand Möbius Facts for Kids. Kiddle Encyclopedia.