August Horch (12 October 1868 – 3 February 1951) was a German engineer and automobile pioneer, the founder of the manufacturing giant which would eventually become Audi. 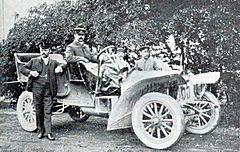 1906 Horch, which Dr. Rudolf Stoess drove to victory in the Herkomer Trial. 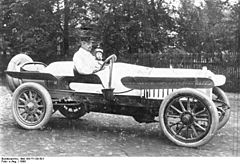 August Horch in a Horch automobile, 1908.

Horch was born in Winningen, Rhenish Prussia. His initial trade was as a blacksmith, and then was educated at Hochschule Mittweida (Mittweida Technical College). After receiving a degree in engineering, he worked in shipbuilding. Horch worked for Karl Benz from 1896, before founding A. Horch & Co. in November 1899, in Ehrenfeld, Cologne, Germany.

The first Horch automobile was built in 1901. The company moved to Reichenbach in 1902 and Zwickau in 1904. Horch left the company in 1909 after a dispute, and set up in competition in Zwickau. His new firm was initially called Horch Automobil-Werke GmbH, but following a legal dispute over the Horch name, he decided to make another automobile company. (The court decided that Horch was a registered trademark on behalf of August Horch's former partners and August Horch was not entitled to use it any more). Consequently, Horch named his new company Audi Automobilwerke GmbH in 1910, Audi being the Latinization of Horch.

Horch left Audi in 1920 and went to Berlin and took various jobs. He published his autobiography, I Built Cars (Ich Baute Autos) in 1937. He also served on the board of Auto Union, the successor to Audi Automobilwerke GmbH he founded. He was an honorary citizen of Zwickau and had a street named for his Audi cars in both Zwickau and his birthplace Winningen. He was made an honorary professor at Braunschweig University of Technology.

All content from Kiddle encyclopedia articles (including the article images and facts) can be freely used under Attribution-ShareAlike license, unless stated otherwise. Cite this article:
August Horch Facts for Kids. Kiddle Encyclopedia.