Reichenbach im Vogtland originated as a settlement of the Franks and thanks its early growth to its convenient position in a valley near Mylau Castle. In 1212 it was officially named Richenbach, possibly because of the many wetland basins (German: Bächen) in the area which now hosts the Altstadt. It received town privileges around 1240 and was mentioned in 1271 in a decree as "civitatis richenbach", a recognized small city with autonomous rights to defend itself, trade and hold municipal elections. Much of the Reichenbach history was lost in the city fires of 1720, 1773, and 1833. The foundations of the Peter Paul parish church still date back to the 12th century.

The rise of industrialisation allowed the city to grow further, again promoted by its accessibility. Sewing and weaving were Reichenbach's main trades, but in the 19th century the metal working industry settled in the city and in the early 20th century, there was a rise of the pulp and paper industry and printing works. Some of Reichenbach's most remarkable structures date from this era, including its Rathaus (1837–1839), the railway station (1846), and world's largest brick bridge, the Göltzsch Viaduct (1846–1851).

Reichenbach im Vogtland has had a rather insignificant role in World War II. On March 21, 1945, American bombings killed 161 citizens and destroyed or damaged many buildings. Against the orders of the National Socialists, Mayor Dr. Otto Schreiber capitulated the city on April 17 without a fight. The town was occupied by American troops, who handed over control to the Red Army on July 1. About 120 innocent youth aged 15 and 16 were taken in custody and transferred to the Soviet Union's secret service (predecessor of the KGB), hoping all other citizens would be spared.

After Germany was split up, Reichenbach im Vogtland became part of East Germany. The population has since declined from nearly 35,000 to little over 20,000 today. As was the case with many former East German industrial cities, the 1991 German reunification caused many workers to lose their jobs and they started to move away. Many initiatives have since been deployed to rebuild the local economy. There are still many industrial buildings in Reichenbach with a high historic value, but with little appeal. 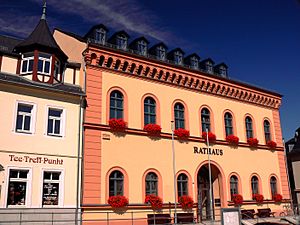 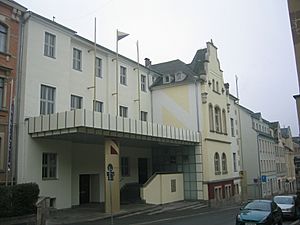 All content from Kiddle encyclopedia articles (including the article images and facts) can be freely used under Attribution-ShareAlike license, unless stated otherwise. Cite this article:
Reichenbach im Vogtland Facts for Kids. Kiddle Encyclopedia.