The Aurora Site, also known as the "Old Fort," "Old Indian Fort," "Murphy Farm" or "Hill Fort" site, is a sixteenth-century Huron-Wendat ancestral village located on one of the headwater tributaries of the East Holland River on the north side of the Oak Ridges Moraine in present-day Whitchurch–Stouffville, approximately 30 kilometres north of Toronto.

This Huron ancestral village was located on 3.4 hectares (8.4 acres) of land and the settlement was fortified with multiple rows of palisades.

The community arrived ca. 1625, likely moving en masse from the so-called Mantle Site located nine kilometres to the south-east in what is today urban Stouffville. The Aurora/Old Fort site is located at the south-east corner of Kennedy Road and Vandorf Side Road, east of the hamlet of Vandorf in the town of Whitchurch–Stouffville. The Aurora site was occupied at the same time as the nearby Ratcliff site.

The Rouge River trail, used by the Huron and then later by the French to travel between Lake Ontario and Lake Simcoe / Georgian Bay, ran through the Aurora site.

Perhaps the busiest and best documented of these routes was that which followed the Humber River valley northward ... although another trail of equal importance and antiquity and used earlier than the former by the French, extended from the mouth of the Rouge River northward to the headwaters of the Little Rouge and over the drainage divide to the East Branch of the Holland River at Holland Landing. 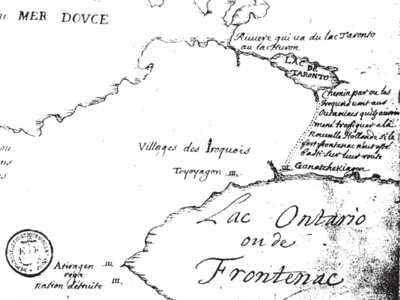 The Aurora/Old Fort site was indiscriminately looted by collectors throughout the eighteenth and early nineteenth centuries. An 1885 report on Whitchurch Township notes that two thousand interments took place on the site, and that another smaller burial site was found two hundred yards from the site beside a large pond.

To say that a ton of archaeological material was collected from the County of York sites, is a moderate estimate. Some of it is in European museums, some in the States, and some of it in Laval University, some of it is still in the hands of amateur collectors, and a little of it has been secured for the Provincial Museum, but the greater part of it, once in the keeping of private collectors, is gone, being collected and lost, as private collections often are.

A complete map of the site was produced in 1930 by the amateur archaeologist Peter Pringle.

This excavation contributed to the conclusions of archeologists and anthropologists that the Wendat coalesced as a people in this area, rather than further east in the St. Lawrence River valley, as was thought at one time. Findings in the late twentieth century at the Ratcliff Site and in 2005 at the Mantle Site have provided more evidence of sixteenth-century settlements by ancestral Wendat in this region. The use of technological and analytic advances, such as radiocarbon dating and Bayesian analysis, has resulted in new conclusions about the occupancy of these varied sites. The Mantle site is now believed to have been occupied 1587 to 1623.

All content from Kiddle encyclopedia articles (including the article images and facts) can be freely used under Attribution-ShareAlike license, unless stated otherwise. Cite this article:
Aurora Site, Wendat (Huron) Ancestral Village Facts for Kids. Kiddle Encyclopedia.