Austins Ferry is a suburb of Hobart, capital city of Tasmania, Australia. It is predominantly a new homes area.

Austins Ferry is named after James Austin (1776–1831), who had been transported to Port Phillip as a convict in 1803 along with his cousin John Earl, and arrived in Van Diemens Land in 1804. After their sentences expired both men were given small land grants on the western shore of the River Derwent between Hobart and New Norfolk. In 1818 they established a ferry service across the river and later a punt which proved very conveniently located for vehicular traffic travelling between Hobart and regions to the north, and became very wealthy. In 1821 the visiting Governor Lachlan Macquarie renamed the village Roseneath, but it has since reverted to its original name. James Austin's original cottage (picture on the right) is preserved as a tourist attraction. The opening hours for the cottage are limited to Sundays between 1pm and 4pm, it provides crafts and historical information.

Austins Ferry is the location of St Virgil's College.

Panorama of the upper half of Austins Ferry 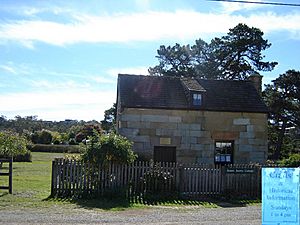 All content from Kiddle encyclopedia articles (including the article images and facts) can be freely used under Attribution-ShareAlike license, unless stated otherwise. Cite this article:
Austins Ferry, Tasmania Facts for Kids. Kiddle Encyclopedia.