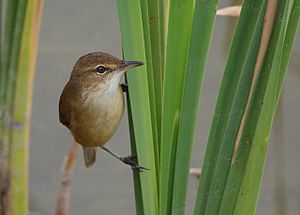 This species appears long (15–18 cm), slender and plain, with drab brown plumage that varies with wear. Wing tips fall short of the uppertail-coverts giving the wings a short appearance. The beak is long and thin (17-23mm) with a slightly decurved bill that has a slight hook at the tip. The tarsus and feet appear long compared to the tibia which is short and feathered. Sexes are monomorphic. In fresh plumage, birds have russet brown plumage extending from the crown down to the back. The uppertail-coverts are rufous, the tail measurers between 51–71 mm, the underparts and belly plumage is a duller rufous brown than the back, and white plumage is found on the throat and chin. An indistinct pale brown supercilium extends from close to the bill to midway on the ear-coverts, the feathers on the crown are slightly elongated and they are often raised to form a crest during song Juveniles are very similar to adults but have yellowish-brownish uppertail-coverts and underparts. Worn plumage on rump and uppertail-coverts is duller and the upperparts have a grey or olive tinge, the underparts become faded and appear to merge into the paler throat plumage and the supercilium fades to white.

Described as a sweet melodious warble with rich fluty notes as well as hard and metallic sounding notes, Australian reed warbler song is loud and varied. The song of this species consists of sets of short sequences consisting of a pattern of sounds that is repeated, after a 3-5 second interval, varied combinations of sounds are repeated. Song is believed to be a sexually selected trait in Australian reed warblers, used as a signal to advertise a males fitness to females and other males as well as in establishing and defending breeding territories

Australian reed warblers are found in a wide range of natural and man-made wetlands including fresh, brackish and saltwater environments. Dense vegetation with vertical structures such as; reeds (Phragmites), reedmace (Typha) and rushes (Juncus) are frequented in breeding and non-breeding season and Australian reed warblers are often observed perched sideways midway along a reed stem. This species is occasionally observed in shrub lands and riparian woodlands surrounding water bodies where it can be observed foraging.

This species forages mainly individually but sometimes in pairs, in dense vegetation on insects and spiders and occasionally molluscs and seeds. The Australian reed warbler forages amongst dense riparian vegetation and in surrounding shrubs and woodlands where it can be seen gleaning arthropods from vegetation. This species is also known to sometimes forage on open mud near reeds and rushes. 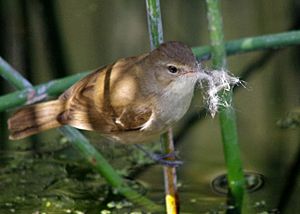 This species forms a socially monogamous seasonal breeding pair, nest building and chick feeding are carried out by the pair for the season. The same male and female pairings are not typically repeated in following seasons. Australian reed warblers are known to be polygynous/polyandrous and engage in extra-pair copulations. Unlike all other Acrocephalus species which are sedentary, the Australian reed warbler migrates seasonally. The Australian reed warbler migrates to South West and South East Australia to breed from overwinter grounds throughout Eastern and Northern Australia. Males arrive at the breeding grounds from July to August onwards. Breading season is October to December in south-eastern Australia and September to December in southern Australia. Males and females build the nest, however females contribute more than males. The nest is a deep cup (6.4 – 9 cm diameter and 7 – 18.5 cm height) made from dead and fresh vegetation usually supported by fresh and dead reed stems found between 30–200 cm off the ground or water surface. Incubation is carried out by the female for 13 – 15 days and clutch size is between 2-4 eggs. Chicks are fed by both the male and female in the nest for a period of 10–13 days and parents continue to feed fledglings outside the nest until they are more than 28–29 days old. Australian reed warblers have a nesting success of 58%, nest predation is the major cause of nesting losses. 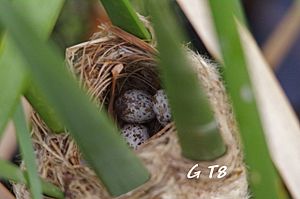 Males arrive at breeding sites before females to establish a breeding territory. During breeding season, it is believed that males use song to establish and defend their territories as well as to advertise their fitness to other males and to females. Males use song extensively throughout the breeding season and can be observed singing from a perched position on breeding ground reeds with their fore crown feathers raised and throat feathers puffed out whilst singing. Whilst males and females build the nest used for incubating eggs and raising chicks, males build a different type of nest structure during courtship. These nest like structures lack the strength and shape to be suitable for eggs and chicks and are constructed prior to breeding commencement. This behaviour and the resultant nest like structures is believed to be driven by mate selection, as well as the selection of a breeding territory during the formation of breeding pairs.

This species is vulnerable to loss of suitable habitat through burning, clearing or draining of waterbodies and reed vegetation surrounding the waterbodies. Migratory birds in south-east Australia are undergoing changes in breeding ground arrival and departure dates as a result of the effects of climate change. The extent of these effects specifically on Australian reed warblers is unknown.

All content from Kiddle encyclopedia articles (including the article images and facts) can be freely used under Attribution-ShareAlike license, unless stated otherwise. Cite this article:
Australian reed warbler Facts for Kids. Kiddle Encyclopedia.