Autolycus of Pitane facts for kids 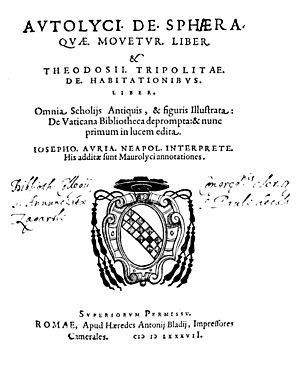 Autolycus of Pitane (ca. 360 BC—d. ca. 290 BC) was a Greek astronomer, mathematician, and geographer. He was born in Pitane, a town of Aeolis, in Asia Minor. His works were probably completed in Athens between the years 335 BC and 300 BC. Autolycus' surviving works include a book on spheres (called On the Moving Sphere) and another on the rising and setting of celestial bodies. On the Moving Sphere is believed to be the oldest mathematical treatise from ancient Greece that is completely preserved.

Autolycus studied the movements of a sphere. It is believed they were the earliest written mathematics related books which have actually survived. Theodosius' Sphaerics was based on Autolycus' work on spheres.

Autolycus studied the relationship between the rising and the setting of the celestial bodies, and wrote that "any star which rises and sets always rises and sets at the same point in the horizon."

A crater on the Moon is named after him.

All content from Kiddle encyclopedia articles (including the article images and facts) can be freely used under Attribution-ShareAlike license, unless stated otherwise. Cite this article:
Autolycus of Pitane Facts for Kids. Kiddle Encyclopedia.