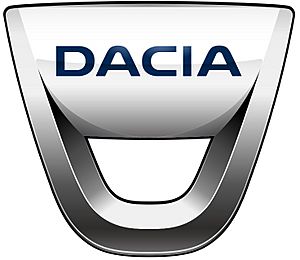 Automobile Dacia S.A. is a Romanian car company. The company was founded in 1966, and has been a subsidiary of the French car manufacturer Renault since 1999. It is Romania's top company by revenue and the largest exporter, constituting 7.3% of the country's total exports in 2014. The Dacia manufacturing plant in Mioveni, Argeș County is Europe's fifth biggest car manufacturing facility by volume producing 584,219 units (cars and CKD kits) delivered in 2016 and 550,912 units in 2015.

All content from Kiddle encyclopedia articles (including the article images and facts) can be freely used under Attribution-ShareAlike license, unless stated otherwise. Cite this article:
Automobile Dacia Facts for Kids. Kiddle Encyclopedia.