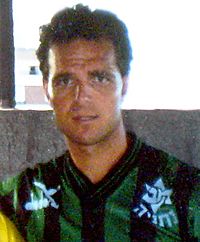 Avaraham "Avi" Cohen (Hebrew: אבי כהן; November 14, 1956 - December 29, 2010) was the first international football star to come from Israel. Born in Cairo, he joined the Maccabi Tel Aviv football club in 1975 and within a year was playing for the Israel national football team. He joined the Liverpool F.C. in 1979 and played with 24 games for them. He went back to Israel but did return to Britain to play 15 games with the Glasgow Rangers. He retired from playing in 1990 and became the chairman of the Israel Professional Footballers Association. He was also football manager.

Cohen died from head injuries in 2010 after his motorbike was hit by a car in Tel Aviv. He was not wearing a proper helmet, which also was not buckled up, when he was hit.

His son, Tamir, plays football in England for the Bolton Wanderers F.C.

All content from Kiddle encyclopedia articles (including the article images and facts) can be freely used under Attribution-ShareAlike license, unless stated otherwise. Cite this article:
Avi Cohen Facts for Kids. Kiddle Encyclopedia.