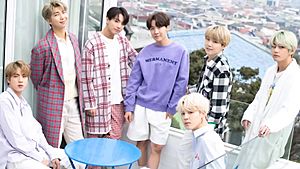 The BTS Meal is a seasonal meal sold by the international fast food chain McDonald's in collaboration with the South Korean boy band BTS. Consisting of Chicken McNuggets, medium French fries, a medium Coca-Cola, and two spicy dipping sauces (Sweet Chili and Cajun), the BTS Meal was introduced on May 26, 2021 in selected countries and eventually reached a total of fifty countries.

The BTS Meal was first released on May 26, 2021 in selected countries, including the United States, Austria, the Bahamas, Brazil, Canada, Columbia, the Dominican Republic, Israel, Malaysia, Paraguay, and St. Maarten. By late June, the meal had been released in fifty countries. Amidst the COVID-19 pandemic, massive crowds in Indonesia reportedly forced the temporary closure of many outlets, whereas in Singapore, the meal could only be ordered via delivery to prevent crowding at outlets due to the pandemic. Upon its release, the BTS-inspired packaging that the meal is served in was listed for resale on several e-commerce platforms; one Carousell user in Singapore reportedly set an asking price of a few billion dollars.

All content from Kiddle encyclopedia articles (including the article images and facts) can be freely used under Attribution-ShareAlike license, unless stated otherwise. Cite this article:
BTS Meal Facts for Kids. Kiddle Encyclopedia.