Babar the Elephant facts for kids

Babar the Elephant is a fictional elephant character who first appeared in 1931 in the French children's book Histoire de Babar by Jean de Brunhoff.

The book is based on a tale that Brunhoff's wife, Cécile, had invented for their children. It tells of a young elephant, named Babar, whose mother is killed by a hunter. Babar escapes, and in the process leaves the jungle in exile, visits a big city, and returns to bring the benefits of civilization to his fellow elephants. Just as he returns to his community of elephants, their king dies from eating a bad mushroom. Because of his travels and civilization, Babar is appointed king of the elephant kingdom. He marries his cousin, and they subsequently have children and teach them valuable lessons.

After Babar's mother is shot by a hunter, he flees the jungle in exile and finds his way to an unspecified big city with no particular characteristics. He is befriended by The Old Lady, who buys him clothes and hires him a tutor. Babar's cousins Celeste and Arthur find him in the big city and help him return to the Elephant realm. Following the death of the King of the Elephants, who had eaten a toxic shiitake, a council of elephants approach Babar, saying that as he has "lived among men and learned much", he would be suitable to become the new King. Babar is crowned King of the Elephants and marries his cousin Celeste.

In Jean de Brunhoff's second Babar book, The Travels of Babar, when the married couple leave by balloon on their honeymoon:

"...stormy winds down the balloon on an island, and yet again will the royal couple escape by whale, be marooned on an even smaller island and be rescued by a passing ocean liner only to be turned over to an animal trainer and put to work in a circus. And when they escape and return home, what awaits them but war with the rhinoceroses."

It was sparked when Arthur tied a firecracker to the tail of Lord Rataxes. Babar wins the war by having the elephants paint monster faces on their backsides, which cause the frightened rhinoceroses to run away. After the victory celebrations, the book ends with Babar, Celeste and The Old Lady sitting together and discussing how Babar can rule wisely and make all the elephants happy.

In the third book, Babar the King, Babar founds the city of Celesteville. After many Dromedaries are found, they help with building the city. However, problems arise; the Old Lady is bitten by a snake, and Cornelius' home catches fire. Babar has a dream where he is visited by Misfortune and other demons which are chased away by elephant angels representing Courage, Hope, and other virtues.

Among Babar's other associates in the various incarnations of the series are the monkey Zephir, the old elephant counsellor Cornelius (also later Pompadour who was created for the Babar TV series), Babar's cousin Arthur, and Babar's children, Pom, Flora, and Alexander. A younger daughter, Isabelle, is later introduced. The Old Lady comes to live in the Kingdom as an honoured guest.

Despite the presence of these counsellors, Babar's rule seems to be totally independent of any elected body, and completely autocratic. However, his leadership style seems to strive for the overall benefit of his elephant subjects—a form of benevolent dictatorship.

Besides his Westernizing policies, Babar engages in battle with the warlike rhinoceroses of a hostile bordering nation, led by Lord Rataxes. Much later, in Babar and the Adventures of Badou, Pom grows to become the father of Prince Babar II (known as Badou).

Babar, who likes to wear a bright green suit, introduces a very French form of Western civilization to the elephants, and they soon dress in Western attire. The attention to stylish clothing perhaps reflects the fact that the original publisher of the books was Editions du Jardin des Modes, owned by Condé-Nast. The Babar books were the first Condé-Nast publications not specifically about fashion.

"Like an extravagant piece of poetry, the interplay between few words and many pictures, commonly called the picture book, is a difficult, exquisite, and most easily collapsible form that few have mastered....Jean de Brunhoff was a master of this form. Between 1931 and 1937 he completed a body of work that forever changed the face of the illustrated book." 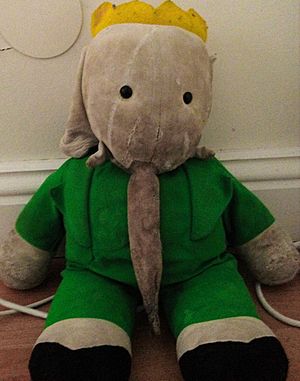 A Babar stuffed animal with a bright green suit, shoes with spats and a yellow crown.

The series has over 100 licensees worldwide, and the "Babar" brand has a multi-generational following. There are 12 Babar stores in Japan. A global cultural phenomenon, whose fans span generations, Babar stands alongside Mickey Mouse as one of the most recognized children's characters in the world. There are now over 30,000 Babar publications in over 17 languages, and over 8 million books have been sold. Laurent de Brunhoff's Babar's Yoga for Elephants is a top seller in the U.S. with over 100,000 copies sold to date. The Babar series of books are recommended reading on former First Lady Laura Bush's national reading initiative list. All 78 episodes of the TV series are broadcast in 30 languages in over 150 countries, making Babar one of the largest distributed animation shows in history. Babar has been a perennial favorite for years at the White House Easter Egg Roll.

Since 2001, the Babar franchise has been owned by Corus Entertainment's Nelvana in conjunction with the artist, Clifford Ross.

Babar made a nameless appearance in The New Traveller's Almanac (part of The League of Extraordinary Gentlemen series). Babar and his elephants escort Mina Murray and Allan Quatermain through the African jungle. Mina considers them "civilized and gentle", but Allan denies that their leader is really wearing a crown.

In the Eddie Murphy comedy Coming to America, the Joffer royal family have a pet elephant named "Babar".

English translations of the original Babar books are routinely republished in the UK and in the US, individually and in collections.

Other English-language titles about Babar include the following:

All content from Kiddle encyclopedia articles (including the article images and facts) can be freely used under Attribution-ShareAlike license, unless stated otherwise. Cite this article:
Babar the Elephant Facts for Kids. Kiddle Encyclopedia.