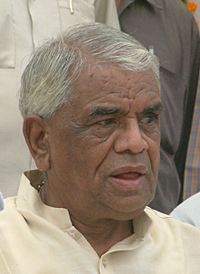 Babulal Gaur Yadav (2 June 1930 – 21 August 2019) was an Indian politician. He was a member of the Bharatiya Janata Party (BJP). He was elected in 10 Assembly elections from the seat of Govindpura in Bhopal before retiring from electoral politics in 2018. He was the 16th Chief Minister of Madhya Pradesh from August 2004 through November 2005. He was born in Naugir, United Provinces.

Gaur died on 21 August 2019 from cardiac arrest at a medical center in Bhopal at the age of 89.

All content from Kiddle encyclopedia articles (including the article images and facts) can be freely used under Attribution-ShareAlike license, unless stated otherwise. Cite this article:
Babulal Gaur Facts for Kids. Kiddle Encyclopedia.