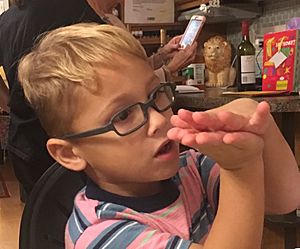 "Baby Shark" is a children's song featuring a family of sharks. Popular as a campfire song, it has taken off since 2016, when Pinkfong, a South Korean education company, turned it into a viral video which spread through social media, online video, and radio.

"Baby Shark" originated from a campfire song or chant. Some sources have mentioned traditional myths as a basis, others camping origins in the 20th century, and some see it as possibly developed by camp counselors inspired by the movie Jaws. It became a campfire song where each member of a family of sharks is introduced with different hand motions. Different versions of the song have the sharks hunting fish, eating a sailor, or killing people, who then go to heaven.

Various entities have copyrighted original videos and sound recordings of the song, and some have trademarked merchandise based on their versions; however, according to The New York Times, the underlying song and characters are believed to be in the public domain.

A dance version of "Baby Shark" was popularized online in the 2007 YouTube video "Kleiner Hai" (German for Little Shark) and published by Alexandra Müller, also known by her stage name Alemuel. This version is set to the theme of Jaws and tells the story of a baby shark who grows up and eats a swimmer. The video quickly gained popularity and EMI offered Alemuel a record deal and published the song accompanied by disco beats on May 30, 2008. The single peaked at 25th on of the German charts and at 21 in the Austrian charts. Based on the single and the original video, the YouTube community created a popular music video. The German version of the song remains popular among German youth groups and multiple variations (also in different dialects of German) have been published.

Johnny Only, a children's entertainer based in Upstate New York, was a DJ at a kids camp, and the counselors would regularly perform the song with their campers, acting out the hand gestures and going through each verse. Only saw how engaged and animated the campers were when "Baby Shark" was performed, so when he became a full-time children's entertainer, he released his own version. That was in 2011, five years before another version of "Baby Shark" became a global phenomenon.

The "Baby Shark" song was further popularized by a video produced by Pinkfong, an education brand within South Korean media startup SmartStudy. The original video for "Baby Shark" (Hangul: 상어 가족; RR: Sang-eo Gajok) was uploaded on November 26, 2015. All videos related to Pinkfong's song have garnered around 5 billion views as of January 2019[update], making it the most-viewed educational video phenomenon of all time.

This version of the song was performed by then-10-year-old Korean-American singer Hope Segoine. The music video featured two child actors, one of whom is child actress Elaine Johnston, a 9 year-old New Zealander of Korean–Scottish descent.

The song starts with bars from Antonín Dvořák's Symphony No. 9 to which music from the movie Jaws sounds similar. The song features a family of sharks which go hunt a school of fish which escape to safety. It became a viral video in Indonesia in 2017, and throughout the year it spread to many other Asian countries, particularly those in Southeast Asia. The related mobile app was among the top 10 most downloaded in the family apps category in South Korea, Bangladesh, Singapore, Hong Kong and Indonesia in 2017.

As of May 2020[update], the most popular video of the "Baby Shark" song (labeled as "Baby Shark Dance"), uploaded on June 17, 2016, has received over 5.4 billion views worldwide, making it the second most viewed video on YouTube. Due to a 2013 change that the Billboard Hot 100 music charts made to account for online viewership of YouTube videos, "Baby Shark" broke into the Billboard Hot 100 at number 32 during the week of January 7, 2019.

Due to its popularity, this version of the song has spurred an online dance craze (sometimes referred to as Baby Shark Challenge) while being cited as "the next big thing after the domination of Gangnam Style". K-pop groups including Blackpink and Red Velvet have been credited with further spreading the viral song through their coverage of the song and dance, specifically on their featured TV shows and concerts. The song began to go viral in the Western world in August 2018.

In 2019, it was announced that Baby Shark would be adapted into a Nickelodeon series set to premiere on Nickelodeon's Nick Jr. block and the Nick Jr. channel in 2020. Nickelodeon and SmartStudy (the company that owns the Pinkfong brand) would team up for an exclusive worldwide consumer products partnership.

In January 2020, Pinkfong Baby Shark was announced to have an exclusive one-day only takeover of the Nick Jr. on Nickelodeon block during the January 31 "Underwater Adventures" marathon leading up to a new episode of Nick Jr. series Blaze and the Monster Machines to celebrate the soon to be released Nick Jr. Baby Shark TV series adaptation. Nickelodeon also put their own parody of the song with Nick Jr. characters involved to promote the broadcast.

In July 2019, Kellogg's announced that it has entered a partnership with Pinkfong to introduce a new Baby Shark cereal, a berry-flavored variant of Froot Loops with marshmallows added. It was first available at Sam's Club stores on August 17, and at Walmart in late September.

In October 2019, a 75-minute stage musical based on the Pinkfong song and characters, titled Baby Shark Live!, made its debut at Spartanburg Memorial Auditorium in Spartanburg, South Carolina. By this time, Pinkfong was also marketing a wide variety of merchandise based on their song and video, including clothing, bedding, toys and fishing tackle.

"Baby Shark" has appeared in media like films and video games. In 2019 and 2020, the song was featured in The Angry Birds Movie 2 and Rubber and was playable in Just Dance 2020. The following year, Pinkfong partnered with Bushiroad to include "Baby Shark" as a playable track in the English server of BanG Dream! Girls Band Party! from March 27 to April 17.

In March 2020, Baby Shark released a new interactive song that encourages children to wash their hands with the right procedures during the COVID-19 pandemic.

Drag queen and contestant on RuPaul's Drag Race Yvie Oddly adapted the song for live lip-syncing performances, including a choreography that draws inspiration from voguing.

Professional baseball player Gerardo Parra of the Washington Nationals, having discovered the song through his young daughter, adopted it as his walk-up music to energize the flagging team on June 19, 2019. The theme became popular among both teammates and fans, who used the shark clap whenever the Nationals got a hit, and eventually, at every Parra at-bat; fans also began wearing shark costumes to the stadium. A stuffed baby shark was seen attached to the dugout railing during the 2019 National League Championship Series, which the Nationals won over the St. Louis Cardinals. The craze culminated with the Nationals defeating the Houston Astros in seven games to win the 2019 World Series; the connection was such that the Marine Band performed the song during the team’s celebratory visit to the White House.

The song has also been performed by anti-government protesters in Lebanon during the 2019–20 Lebanese protests.

Popular Australian children's music band The Wiggles released a version of the song in March 2020.

All content from Kiddle encyclopedia articles (including the article images and facts) can be freely used under Attribution-ShareAlike license, unless stated otherwise. Cite this article:
Baby Shark Facts for Kids. Kiddle Encyclopedia.