The position Bactrosaurus occupies in the Cretaceous makes it one of the earliest known hadrosauroids, and although it is not known from a full skeleton, Bactrosaurus is one of the best known of these forms of hadrosaurs predecessors. 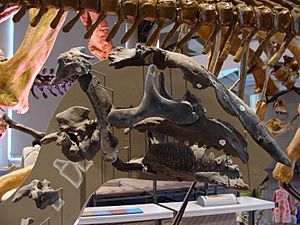 Partial B. johnsoni skull in the Royal Belgian Institute of Natural Sciences.

It was an early relative of Lambeosaurus, perhaps a predecessors, as it shows a number of iguanodont-like features, including three stacked teeth for each visible tooth, small maxillary teeth, and an unusually powerful build for a hadrosaur. It shows features intermediate between those of the two main hadrosaurid groups, and may represent an ancestral form that evolved from an earlier iguanodontid dinosaur.

Bactrosaurus was originally described as lacking a crest, which would be typical for an iguanodont, but anomalously primitive for a lambeosaurine like itself. However subsequent study of Bactrosaurus remains uncovered pieces of what appear to be the base of an incompletely preserved crest.

In 2003, evidence of tumors, including hemangiomas, desmoplastic fibroma, metastatic cancer, and osteoblastoma was discovered in fossilized Bactrosaurus skeletons. Rothschild et al. tested dinosaur vertebrae for tumors using computerized tomography and fluoroscope screening. Several other hadrosaurids, including Brachylophosaurus, Gilmoreosaurus, and Edmontosaurus, also tested positive. Although more than 10,000 fossils were examined in this manner, the tumors were limited to Bactrosaurus and closely related genera. The tumors may have been caused by environmental factors or genetic propensity. 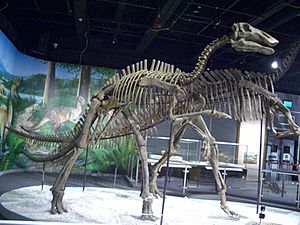 The first Bactrosaurus remains recovered from the Iren Dabasu Formation in the Gobi Desert of China were composed of partial skeletons of six individual B. johnsoni. The specimens collected appear to come from a variety of age groups, from individuals that may be hatchlings to full-sized adults. The fossils were described in 1933 by Charles W. Gilmore, who named the new animal Bactrosaurus, or "club lizard", in reference to the large club-shaped neural spines projecting from some of the vertebrae.

No complete remains have yet to be uncovered, but Bactrosaurus is still better known than most of the early hadrosaurs. Known parts of the anatomy of Bactrosaurus include the limbs, pelvis, and most of the skull (although the crest is notably absent).

All content from Kiddle encyclopedia articles (including the article images and facts) can be freely used under Attribution-ShareAlike license, unless stated otherwise. Cite this article:
Bactrosaurus Facts for Kids. Kiddle Encyclopedia.