Lambeosaurus was a crested, duck-billed dinosaur. Its large hollow, bony crest was as big as the rest of its skull. Its function has been much discussed.

Lambeosaurus lived during the later Cretaceous period, about 76 to 75 million years ago (mya). Fossils of it have been found in Alberta (Canada), Montana (USA), and Baja California (Mexico), but only the two Canadian species have been described in detail. Apparently, the Mexican species, Lambeosaurus laticaudus, grew to be about 50 feet long (15 m), weighing 5.6 tons. It is the longest-known ornithischian dinosaur. The other species were smaller.

Lambeosaurus was described by Dr. William A. Parks in 1923, 20 years after Lawrence Lambe (an early Canadian fossil hunter) had studied it. The genus ranged over much of North America, and into Mexico.

As a hadrosaurid, Lambeosaurus was a large bipedal/quadrupedal herbivore, eating plants. It had a sophisticated skull that allowed a grinding motion like mammalian chewing. Its teeth were continually replaced and were packed into dental batteries that each contained over 100 teeth, only a relative handful of which were in use at any time.

It used its beak to crop plant material, which was held in the jaws by a cheek-like organ. Feeding would have been from the ground up to around 4 meters (13 ft) above.

Lambeosaurines have narrower beaks than hadrosaurines, which suggests that Lambeosaurus and its relatives could feed more selectively than their broad-beaked, crestless counterparts. 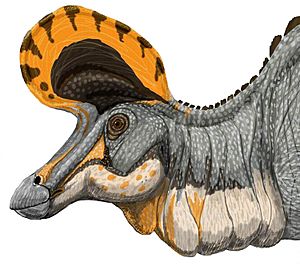 Like other lambeosaurines such as Parasaurolophus and Corythosaurus, Lambeosaurus had a distinctive crest on the top of its head. Its nasal cavity ran back through this crest, making it mostly hollow. Many suggestions have been made for the function or functions of the crest. They include housing salt glands, improving the sense of smell, use as a snorkel or air trap, acting as a resonating chamber for making sounds, or being a method for different species or different sexes of the same species to recognize each other. Social functions such as noisemaking and recognition have become the most widely accepted of these hypotheses.

The large size of hadrosaurid eyes and the presence of sclerotic rings in the eyes imply acute vision and diurnal habits, evidence that sight was important to these animals. The hadrosaurid sense of hearing also appears to be strong. There is at least one example, in the related Corythosaurus, of a slender stapes in place, which combined with a large space for an eardrum implies a sensitive middle ear. The auditory part of the inner ear was well-developed. If used as a noisemaker, the crest could also have provided recognizable differences for different species or sexes, because the differing layouts of the nasal passages corresponding to the different crest shapes would have produced different sounds.

All content from Kiddle encyclopedia articles (including the article images and facts) can be freely used under Attribution-ShareAlike license, unless stated otherwise. Cite this article:
Lambeosaurus Facts for Kids. Kiddle Encyclopedia.