Bad Aibling (;) is a spa town and former district seat in Bavaria on the river Mangfall, located some 56 km (35 mi) southeast of Munich. It features a luxury health resort with a peat pulp bath and mineral spa. 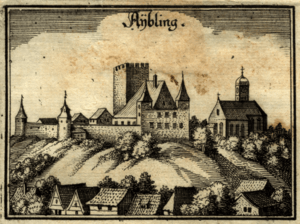 Bad Aibling and its surroundings were settled by Celtic tribes from about 500 BC until 15 BC. After Roman occupation, it was finally settled by Bavarii tribes in the 5th century AD. In 804 Bad Aibling was mentioned for the first time as "Epininga". In mediaeval times, it was an administrative centre in the lordship of the Counts of Falkenstein. After the obliteration of the Neuburg-Falkenstein dynasty, it became part of the realm of the Wittelsbach family.

In 1845 the first treatments with peat pulp were offered by the physician Desiderius Beck. Bad Aibling received the title "Bad" (spa or springs) in 1895.

In the year 1933, Bad Aibling officially became a city. After the Second World War, Bad Aibling was the site of POW Discharge Center #26, where German POWs were released from captivity to civilian status. In 1946, a DP camp housing former members of the Royal Yugoslav Army was set up on the grounds of the city's airbase. The camp was first operated by UNRRA, and later by the IRO. From 1948 onwards, the area was home to the IRO Children's Village, a DP camp for unaccompanied children and youth belonging to more than 20 nationalities. Over 2,300 inhabitants passed through this facility (the largest of its kind in the US Zone) before it was closed in late 1951. Later, the area evolved into a major centre for intelligence organizations and secret services.

In 2005 the American Bad Aibling ECHELON station (Field Station 81) closed after several decades of operation. After the departure of the NSA, parts of the station have been used by the Bundesnachrichtendienst (BND), with NSA employees moving to the Mangfall barracks. The radomes are still used intensively. The station is used in cooperation with the NSA, which provides the BND with search terms (such as email addresses), which then forwards the results back to the NSA.

In Bad Aibling there are several large spa hotels and rehabilitation hospitals that rely on peat pulp as a basic treatment. Additionally, in 2007 the new thermae were opened.

Companies based in Bad Aibling 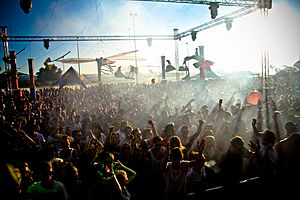 The Echelon festival in the year 2012

The Echelon Open Air & Indoor Festival is an electro-, techno and house-festival that has taken place in Bad Aibling annually in August since 2009. With about 25.000 visitors in 2015 it is the largest festival of its kind in Bavaria. It is located on the abandoned Bad Aibling Station which was used for the festival's eponymous global surveillance network ECHELON.

Bad Aibling has been twinned with

All content from Kiddle encyclopedia articles (including the article images and facts) can be freely used under Attribution-ShareAlike license, unless stated otherwise. Cite this article:
Bad Aibling Facts for Kids. Kiddle Encyclopedia.