Bad Buchau (formerly Buchau) is a small town in the district of Biberach, Baden-Württemberg, Germany with about 4,000 inhabitants. It is situated near Lake Federsee, which is separated from the town by a wide reed belt.

The official language is German, with day-to-day conversations by the majority of its inhabitants in the Swabian dialect.

From the 13th century to the mediatisation of 1803, Buchau had the particularity of being the seat of both an Imperial Abbey and a Free Imperial City. In terms of area, it was one of the smallest such cities and its island situation eliminated the necessity to erect city walls and towers. Buchau, however, lost its insular benefits after the water level of Lake Federsee had been lowered on two occasions. 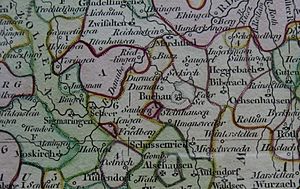 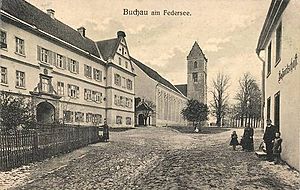 The convent and abbey church in the late 19th century

The prehistoric settlement at Siedlung Forschner is part of the Prehistoric Pile dwellings around the Alps a UNESCO World Heritage Site. 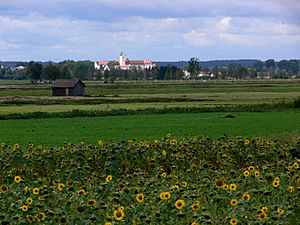 View of the abbey complex 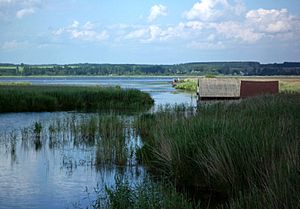 All content from Kiddle encyclopedia articles (including the article images and facts) can be freely used under Attribution-ShareAlike license, unless stated otherwise. Cite this article:
Bad Buchau Facts for Kids. Kiddle Encyclopedia.