Biberach ['bi:bərax] is a district in Baden-Württemberg, Germany. It is surrounded by (from the south and clockwise) the districts of Ravensburg, Sigmaringen, Reutlingen and Alb-Donau, and the Bavarian districts Neu-Ulm, Unterallgäu and the district-free city Memmingen. The most important towns in the district of Biberach are Biberach (Riß), Riedlingen, Ochsenhausen and Laupheim.

The Federsee is a small lake in the southwest of the district. Its area is only 1.4 km², but it is famous for Neolithic findings and birds that are not seen a lot.

The local newspaper is the Schwäbische Zeitung ("Swabian Newspaper"). The Biberach Independent Film Festival focusses on experimental shorts and documentaries. The festival starts at the end of October and runs into November. 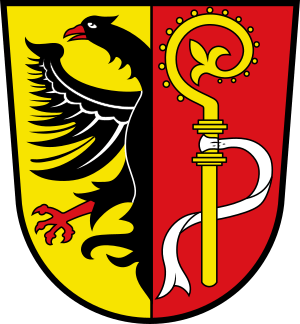 All content from Kiddle encyclopedia articles (including the article images and facts) can be freely used under Attribution-ShareAlike license, unless stated otherwise. Cite this article:
Biberach (district) Facts for Kids. Kiddle Encyclopedia.