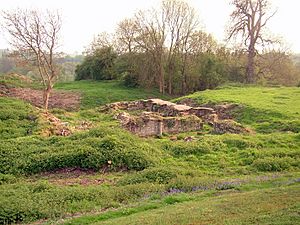 The ruins of the 14th-century Baginton Castle

Baginton Castle, also known as Bagot's Castle, is a ruined castle in Baginton, England. It was originally built in the 12th century by Geoffrey Savage and it was rebuilt as a stone keep during the late 14th century. The surviving ruin that can be seen is of a late 14th-century house, but it is not well known because of its location in an area of woodland on private land. No earthworks or ruins survive of the 12th-century motte and bailey.

The original motte and bailey was built at Baginton by Geoffrey Savage in the 12th century during the reign of Henry I. A dwelling house was also erected on the site. By the 14th century, this castle was in disrepair and it was demolished and rebuilt as a stone keep around 1397 by Sir William Bagot. Henry Percy, 1st Earl of Northumberland, was imprisoned at Baginton Castle following his son Harry Hotspur's defeat at the Battle of Shrewsbury on 21 July 1403. This castle was in disrepair by the 16th century, as it was described by John Leland in 1540 as 'desolate'. By 1714, most of the surviving earthworks of the 12th-century motte had been levelled and were replaced by a pleasure garden; during the 18th century, the ruins were being used as a pigsty. Between 1933 and 1948, the 14th-century keep was excavated, but it was eventually overgrown by shrubs again. It was fully excavated in 2009 to how it is today.

The remains are designated as a Grade II listed building and Scheduled Monument.

All content from Kiddle encyclopedia articles (including the article images and facts) can be freely used under Attribution-ShareAlike license, unless stated otherwise. Cite this article:
Baginton Castle Facts for Kids. Kiddle Encyclopedia.