In spite of his somewhat belated start in cinema, Beyzai is often considered a pioneer of a generation of filmmakers whose works are sometimes described as the Iranian New Wave. His Bashu, the Little Stranger (1986) was voted "Best Iranian Film of all time" in November 1999 by a Persian movie magazine Picture World poll of 150 Iranian critics and professionals. Still, even before the outset of his cinematic career in 1970, he was a leading playwright (as well as theatre historian), so much so that he is often considered the greatest playwright of the Persian language, and holds a reputation as "The Shakespeare of Persia".

Since 2010, Beyzai has lived and taught at Stanford University, United States.

Beyzaie was born in Tehran, to a poet, anthologist and biographer father and a housewife mother. His father made a living through a legal occupation and was able to attend to his literary interests reasonably. 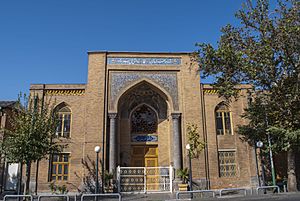 Beyzai attended the Dar'ol-Fonoun high school as an adolescent, where he did not spend a good time getting along, skipped classes and went to the movies, and in his late teens composed his earliest dramatic pieces.

The young Bahram did not seem very interested in his family legacy, being poetry, which was pursued by his father, uncles and cousins. In high school, the Dar'ol-Fonoun, he wrote two historical plays which went on to become his preferred method of writing.

At the age of 21, he did substantial research on the traditional Persian plays, particularly Ta'zieh, and by 1961 he had already spent a great deal of time studying and researching other ancient Persian and pre-Islamic culture and literature. This in turn led him to studying Eastern theatre and traditional Iranian theatre and arts which would help him formulate a new non-Western identity for Iranian theatre. He also became acquainted with Persian painting.

Playwriting in the 1960s

In 1968, Beyzai was one of the nine founders of the Iranian Writers' Guild, a highly controversial organization in the face of censorship. In 1969, he was invited to teach at the Theater Department of the College of Fine Arts at University of Tehran. He chaired this department from 1972 to 1979. With his readership many prominent authors and artists started teaching at the department and created the most fruitful period in the history of that department. 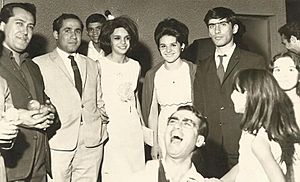 Beyzai in his first wedding in the company of other artists, notably Parviz Fannizadeh and Parviz Sayyad, 1965

Beyzaie's groundbreaking A Study on Iranian Theatre (Namayesh dar Iran), published in mid-1960s is still considered the most important text on the history of Iranian theater. Beyzaie is also the first scholar in Iran to publish books on theatre of Japan and theatre of China.

1970s and the outset of a cinematic career

In 1969, he began his film career by directing the short film Amu Sibilou (Uncle Moustache) followed by "Safar" in 1970. With these films Beyzai is often considered to be a pioneer of what is called the Iranian New Wave, a Persian cinema movement that is supposed to have spontaneously started in the late 1960s, i.e. ignoring earlier efforts by filmmakers such as Farrokh Ghaffari and Ebrahim Golestan, and includes other outstanding directors such as Nasser Taghvai, Forough Farrokhzad, Amir Naderi, Ali Hatami, Sohrab Shahid Sales, Dariush Mehrjui, Abbas Kiarostami, Parviz Kimiavi, Masoud Kimiai and Fereydun Gole among others; and soon following Khosrow Sinai, Masoud Jafari Jozani, Kianoush Ayari, Varuzh Karim-Masihi, Ebrahim Hatamikia and others.

Immediately after, in 1971, he made his first feature film "Ragbar" ("Downpour") which is regarded by critics to this day as one of the most successful Iranian films ever made. The successful film addresses the late Parviz Fannizadeh as its central character and protagonist.

In 1981, the revolutionary leaders started the Iranian Cultural Revolution, as a result of which Beyzaie among many others was expelled from the university. He continued writing and making films though. His screenplay Ruz-e Vaqe'e (The Fateful Day) was adapted into a film in 1995 and another screenplay was adapted into a film named Fasl-e Panjom (The fifth season) in 1996, whilst he also made four of his finest films. He also edited Ebrahim Hatamikia's Borj-e Minu (Minoo Tower).

He married the actress and make-up artist Mozhdeh Shamsai in 1992. After Mosaferan, he failed to get a permit for the production of a number of screenplays. In 1995, he left Iran for Strasbourg at the invitation of the International Parliament of Writers. Soon however he returned and staged The Lady Aoi in Tehran.

In 2001, he made his best-selling film Killing Mad Dogs, after which he managed to stage three plays as well before he left Iran for the United States.

He left Iran in 2010 at the invitation of Stanford University, and has since been the Daryabari Visiting Professor of Iranian Studies, teaching courses in Persian theatre, cinema and mythology. There he has given workshops on the Shahnameh, the history of Iranian performing arts, Iranian as well as Semitic myths, etc. He has also staged several of his plays including his nine-hour Tarabnameh.

He is known as the most intellectual and conspicuous "author" in Iranian cinema and theater. The main theme of his works is the history and "crisis of identity" which is related to Iranian cultural and mythical symbols and paradigms. He is considered as Iran's most prominent screenwriter in terms of dramatic integrity of his works, many of which have been made into films.

Beyzaie has over 50 published plays, some of which are as follows. These works have occasionally appeared in French, English, German and other translations too.

Main page: List of speeches given by Bahram Beyzai

During the making of Ballad of Tara in 1978, Beyzai and his crew in Lisar Castle started a troupe whose name remained in use until the 2000s: Lisar troupe.

The prizes, awards and honors he has won are numerous.

All content from Kiddle encyclopedia articles (including the article images and facts) can be freely used under Attribution-ShareAlike license, unless stated otherwise. Cite this article:
Bahram Beyzai Facts for Kids. Kiddle Encyclopedia.