Eucalyptus baileyana, commonly known as Bailey's stringybark, is a tree endemic to near-coastal areas of eastern Australia. It has rough, stringy bark on its trunk and main branches, lance-shaped adult leaves, flower buds in groups of seven, white flowers with stamens in four bundles and urn-shaped to more or less spherical fruit. 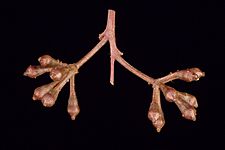 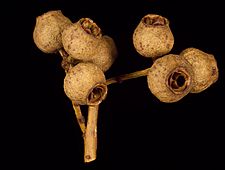 Eucalyptus baileyana was first formally described in 1878 by Ferdinand von Mueller and the description was published in Fragmenta Phytographiae Australiae. The species name (baileyana) honours Frederick Manson Bailey who collected the type specimen from near Moreton Bay.

Bailey's stringybark is often found on hills, ridges and coastal lowlands as part of dry sclerophyll forest or woodland communities growing in nutrient poor, shallow sandy soils over sandstone. In New South Wales it is found along the coast north from Coffs Harbour and across the border into Queensland in a narrow belt that is usually less than 80 kilometres (50 mi) from the coast. It extends as far north as Brisbane with a sporadic distribution further north to around the Blackdown Tableland. Species commonly associated with the tree include Eucalyptus planchoniana, Eucalyptus cloeziana, Eucalyptus citriodora, Eucalyptus gummifera and Eucalyptus intermedia.

This eucalypt is classed as of "least concern" in Queensland under the Queensland Government Nature Conservation Act 1992.

All content from Kiddle encyclopedia articles (including the article images and facts) can be freely used under Attribution-ShareAlike license, unless stated otherwise. Cite this article:
Bailey's stringybark Facts for Kids. Kiddle Encyclopedia.