The Bailey Island Bridge (also called the Cribstone Bridge) is a historic bridge in the town of Harpswell within Cumberland County in the state of Maine.

For many years, the residents of Bailey Island, Maine, advocated that a bridge be built to connect their island with Orr's Island. The town of Harpswell, Maine, which encompasses both islands, turned down the request. However, when the Maine Legislature drafted a law allowing the state and counties to fund bridge construction, a plan emerged to build such a bridge. A contract was signed in 1926, with construction beginning on the Bailey Island Bridge in 1927 and finishing in 1928. The engineer for the project was Llewelyn N. Edwards, bridge engineer for the Maine State Highway Commission. 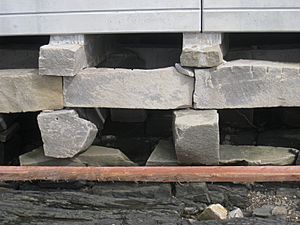 Design of the 1,150-foot-long (350 m) bridge was complicated by the tides in the area known as Will's Gut. It was decided to build a cobwork bridge, using granite slabs as cribstones, acquired from local quarries in nearby Yarmouth, Maine. The slabs allowed the tide to ebb and flow freely without increasing tidal current to any great degree.

Some 10,000 tons of granite were used in the project. A concrete road (now part of Route 24) was built on top of the cribstones.

In 2009 and 2010, the bridge underwent reconstruction to repair cracked or sheared stones. During the repairs, a 1,000-foot-long (300 m) temporary bridge was placed alongside the cribstone bridge so that traffic could continue without disruption. On November 20, 2010, a ribbon-cutting ceremony and parade took place to celebrate the reopening of the bridge. The restored bridge maintains the dimensions of the original, and the replacement stones were obtained from the same quarry in Yarmouth that supplied the original.

All content from Kiddle encyclopedia articles (including the article images and facts) can be freely used under Attribution-ShareAlike license, unless stated otherwise. Cite this article:
Bailey Island Bridge Facts for Kids. Kiddle Encyclopedia.