Baker neighborhood highlighted in a map of Denver

Baker is a neighborhood in Denver, Colorado, United States.

Baker is generally defined by these boundaries: on the north by West 6th Avenue, on the east by Broadway Street, on the south by West Mississippi Avenue, and on the west by the South Platte River.

A historic district of approximately 30 blocks lies in the northeast corner of the neighborhood with irregular borders that range from within a half block of Alameda Ave. and Broadway on the south and east to as far as Fox St. on the west and W. 5th Ave. on the north. The historic district designation was granted in 2000 as Baker Historic District as part of the Historic Preservation effort of the City of Denver. The same area designated as a local historic district had been entered into the National Register of Historic Places as South Side-Baker Historic District in 1985. South Side is a name used in the 1880s for a larger area from Cherry Creek to Yale Ave., mostly east of Broadway. 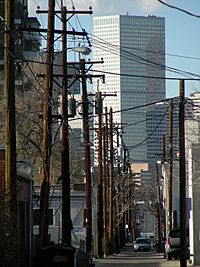 Looking north toward downtown from an alley in the Baker Neighborhood

A portion of the neighborhood's riverfront was homesteaded by William and Elizabeth Byers in 1859, just north of where James Beckwourth, a former slave, settled the same year. The first subdivision in Baker was platted along Santa Fe Dr. south of W. Sixth Ave. in 1872, and residential development took off in the 1880s. The part of the neighborhood north of Alameda Ave. was annexed into the city of Denver in 1883. The neighborhood includes hundreds of 19th century brick houses and 39 buildings by locally famous architect William Lang. More than 80 percent of the neighborhood was developed by 1900. In the 1970s the City of Denver named the neighborhood after Baker Junior High School (now Denver Center for International Studies) which had been named for turn of the 20th century University of Colorado president James Hutchins Baker, who never lived in the neighborhood.

As of the 2010 Census Baker had 4879 residents from a variety of racial, ethnic and socioeconomic backgrounds. 15.3% of Baker residents were under 18 years old. The makeup of the neighborhood was 34.11% Latino, 58.50% non-Latino White, 2.95% African American, 0.88% Native American, 1.07% Asian/Pacific Islander, and 2.50% people of other or mixed racial background. The neighborhood has changed significantly since the 2000 Census, when the two most populous racial/ethnic groups were roughly reversed in proportion, with approximately 54% Latino and 40% non-Latino White. Overall population declined over the decade by 931 people, or 16.02%.

The neighborhood is a mix of industrial, residential and commercial properties with the area along I-25 having an industrial character, the area along Broadway consisting mostly of commercial retail and offices, and north of Alameda between Santa Fe and Broadway making up the residential core. South of Alameda Ave. at Broadway is a large retail center with several big box stores and further south is the former Gates Rubber factory complex, site of a major redevelopment project which stalled in the late 2000s. Dailey Park at W. Ellsworth Ave. and Cherokee St. is the second largest park in the neighborhood while Phil Milstein Park is the largest. Baker is served by several bus lines and two Light Rail stops, Alameda and I-25 and Broadway.

All content from Kiddle encyclopedia articles (including the article images and facts) can be freely used under Attribution-ShareAlike license, unless stated otherwise. Cite this article:
Baker, Denver Facts for Kids. Kiddle Encyclopedia.