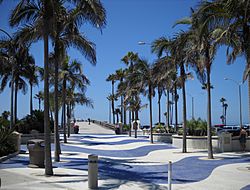 The pier is a popular fishing spot. The fish caught from the pier consist mostly of mackerel and flounder. Additionally, the pilings are home to a large population of starfish that feed on the large colonies of mussels growing there, and are easily spotted at low tide. Fishermen catching starfish by mistake are a relatively common sight.

In the 1980s, the first of Orange County's famous Ruby's Diner restaurants opened on the pier. The 1940s nostalgia-themed restaurant has since become a famous Orange County landmark. 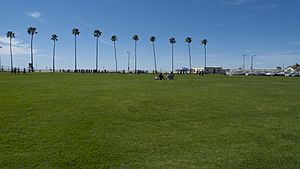 The pier was heavily damaged in the severe El Niño storms of 1998, which also destroyed the famous diamond-shaped Aliso Pier in Laguna Beach. One of the pillars was damaged, causing a partial collapse of one corner. The wooden posts have since been reinforced with steel sheathing and braces to prevent further damage. 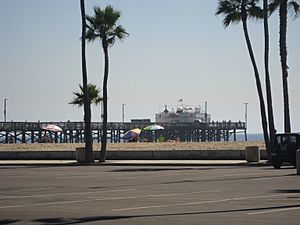 All content from Kiddle encyclopedia articles (including the article images and facts) can be freely used under Attribution-ShareAlike license, unless stated otherwise. Cite this article:
Balboa Pier Facts for Kids. Kiddle Encyclopedia.