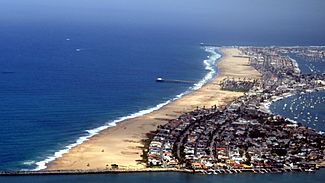 The Balboa Peninsula (also referred to as "Balboa" or "the Peninsula") is a neighborhood of the city of Newport Beach, Orange County, California. It is named after the Spanish explorer, Vasco Núñez de Balboa. Balboa is primarily residential with some commercial areas.

In 1888, the McFadden family, which had arrived in California c. 1849, decided their shipping business would be more successful if they moved it from the inner shores of the bay to the oceanfront, where it was connected by rail to Santa Ana. They built McFaddens’ Wharf at the location where the Newport Pier is today. In 1899, the Federal Government allocated funds for major improvements to a new harbor at San Pedro, which would become Southern California’s major seaport. The McFadden Wharf and railroad were sold to the Southern Pacific Railroad that same year, signaling the end of Newport Bay as a commercial shipping center. 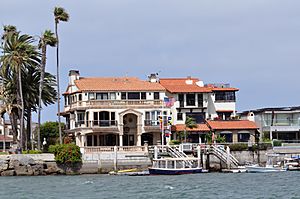 In 1902, James McFadden sold his Newport townsite and about half of the peninsula to William Collins, who saw Newport Bay’s resort and recreation potential. Collins took on Henry E. Huntington as a partner in the Newport Beach Company. Huntington had acquired the Pacific Electric railway system and used it to promote new communities outside of Los Angeles.

In 1905, the Pacific Electric “Red Cars” were extended to Newport. Collins began dredging a channel on the north side of the bay and deposited the sand and silt on tidelands that would become Balboa Island. Newport Harbor was still largely undredged, and sailboats were often the only way to get around. Robert McFadden, an early Balboa Harbor developer, established a successful fishing wharf on the Balboa Peninsula.

All content from Kiddle encyclopedia articles (including the article images and facts) can be freely used under Attribution-ShareAlike license, unless stated otherwise. Cite this article:
Balboa Peninsula, Newport Beach Facts for Kids. Kiddle Encyclopedia.