View of the Newport Municipal Pier from the beach at dawn.

The Newport Pier is one of two municipal piers located within the city of Newport Beach, California, at the center of the Balboa Peninsula. It is 1,032 feet (314.6 m) long. The pier replaced the McFadden Wharf (1888-1939) and the site is registered as California Historical Landmark number 794. 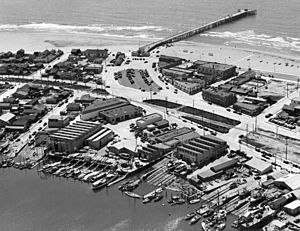 Aerial view of the Newport Municipal Pier at Newport Beach, California in the 1940s

The original pier was known as McFadden Wharf when it was completed in the summer of 1888 by local landowners James and Robert McFadden. The wharf served as a shipping connection for the McFaddens to offload lumber, hides and other merchandise. In 1890, they connected it to the Santa Ana and Newport Railway for commercial transport into Orange, San Bernardino, and Riverside Counties. The McFaddens sold the site in 1902 to W.S. Collins, who began to transform the area for residential and recreational use. The expansion of the Los Angeles passenger railway system to the wharf in 1905 catalyzed the development of the city of Newport Beach as a tourist destination.

In 1922, the pier was remodeled by the City of Newport and remained a shipping terminus until 1939 when it was destroyed in a hurricane.

It serves as the base for Newport Beach Junior Lifeguards, a program run by the fire department that allows for kids to receive basic water training.

All content from Kiddle encyclopedia articles (including the article images and facts) can be freely used under Attribution-ShareAlike license, unless stated otherwise. Cite this article:
Newport Pier Facts for Kids. Kiddle Encyclopedia.