According to the United States Census Bureau, the village has a total area of 1.26 square miles (3.26 km2), all land.

There were 404 households of which 29.7% had children under the age of 18 living with them, 24.0% were married couples living together, 19.8% had a female householder with no husband present, 3.2% had a male householder with no wife present, and 53.0% were non-families. 49.0% of all households were made up of individuals and 20% had someone living alone who was 65 years of age or older. The average household size was 2.07 and the average family size was 3.06.

There were 397 households out of which 26.7% had children under the age of 18 living with them, 27.0% were married couples living together, 17.1% had a female householder with no husband present, and 53.9% were non-families. 49.6% of all households were made up of individuals and 27.2% had someone living alone who was 65 years of age or older. The average household size was 2.12 and the average family size was 3.19. 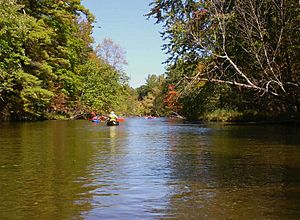 Tourists canoeing on the Pere Marquette River in the Manistee National Forest.

Baldwin is primarily a tourist town. As such, much of its economy is based around the summer months. Lake County sports many lakes and rivers, as well as the vast wilderness of the Manistee National Forest. Many come to Baldwin on vacation to camp, canoe, fish, or hunt.

The Shrine of the Pines is a noted tourist attraction.

The nearby Pere Marquette River is one of America's Blue Ribbon fisheries and sportfishing is a major contributor to the local economy.

The nearby Baldwin River, a tributary of the Pere Marquette River, is the site of the first planting of German Brown Trout in the United States on April 11, 1884.

The North Lake Correctional Facility is a private, for-profit, maximum security prison that was constructed in the late 1990s in Baldwin by the Wackenhut Corrections Co. (now the GEO Group). The prison was originally built to house Michigan’s youth offenders, but the state withdrew its charges from the facility. The GEO group expanded the prison from 500 to 1,700 beds; by 2005 it was vacant. For a brief time it housed some inmates from California in 2011 but was soon closed again.

In June 2015, GEO Group contracted for two years with the state of Vermont to house 280 high-security inmates convicted of crimes in the state of Vermont in the North Lake Correctional Facility. It was far from home; many had previously been housed in private prison facilities in Kentucky and Arizona.

This contract was facilitated by the state legislature enacting a bill to support the private prison, specifically to authorize incarceration of high-security inmates at this facility. Lake Country Republican Rep. Jon Bumstead had sponsored a bill in the Michigan Legislature to raise the security rating of the North Lake facility to Michigan's highest in order to accomplish this. The Michigan Senate voted 23-14 to remove the former restrictive provision, making it legal for the GEO Group to house out-of-state prisoners of all security classifications in Baldwin.

As Lake County has high poverty and unemployment rates, legislators thought the expanded prison could provide some jobs to local residents. County Commissioner Dan Sloan stated that as many as 150 jobs would result from the transfer of out-of-state prisoners to the facility. In December 2016 GEO Group told Vermont that it would not renew its contract with the state in June 2017; some 256 long-term prisoners from Vermont are being held at this prison.

All content from Kiddle encyclopedia articles (including the article images and facts) can be freely used under Attribution-ShareAlike license, unless stated otherwise. Cite this article:
Baldwin, Michigan Facts for Kids. Kiddle Encyclopedia.