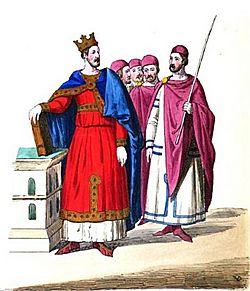 Baldwin was the oldest son of Baldwin V, Count of Flanders and Adela of France. Adela was a daughter of king Robert II of France. and Constance of Arles. He was also the brother of Matilda of Flanders, Queen consort of England and wife of William the Conqueror, King of England.

His father arranged his marriage, under threat of arms, to Richilde, Countess of Hainaut. She was the widow of Herman of Mons and heiress of Hainaut. Because Hainaut was a part of the Holy Roman Empire this enraged Emperor Henry III who had not been consulted. He went to war against the two Baldwins but was not successful. Between 1050 and 1054 Lambert II, Count of Lens fought alongside the Baldwins against Henry III. He was one of Baldwin V's leading vassals. Lambert was killed at the battle of Lille in 1054. Others fighting for the Counts of Flanders against Henry III included the lords of Alost.

Richilde son Roger, from her first marriage, was thought by her not fit to be the next count of Hainaut. Baldwin and Richilde arranged for him to be the Bishop of Chalons. This allowed her son by her second marriage, Baldwin (II) to become the count of Hainaut. Her daughter by her first husband became a nun. Baldwin acquired the remainder of the county of Hainaut by fiefs and by purchasing allods. Baldwin died 17 Jul 1070. His early death left Flanders and Hainaut in the hands of his young son Arnulf III, with Richilde as regent.

Baldwin rebuilt the monastery of Hasnon and gave gifts of his own properties to support it. He placed monks there and made it his burial place.

Baldwin and Richilde were the parents of:

All content from Kiddle encyclopedia articles (including the article images and facts) can be freely used under Attribution-ShareAlike license, unless stated otherwise. Cite this article:
Baldwin VI, Count of Flanders Facts for Kids. Kiddle Encyclopedia.