Balsam Lake is a village in, and the county seat of, Polk County, Wisconsin, United States. The population was 1,009 at the 2010 census. The village is located within the Town of Balsam Lake. 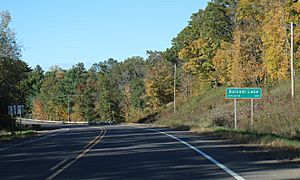 The area in and around Balsam Lake was originally inhabited by a large band of Chippewa Indians. They referred to the area as "Innenehinduc," which means "place of the evergreen." This may have been due to the large amount of Canadian Yew, an evergreen shrub, which grew in abundance there.

The town was organized on January 8, 1870, and was named after the lake that lay within its borders. The first businesses included a blacksmith shop, a bank, a creamery, two sawmills, a hardware store, and a general store. Governmental buildings included a courthouse and a log schoolhouse.

Today, Balsam Lake is the home of the Polk County Government Center.

The town celebrates its history, and the history of the United States, with its annual Freedom Festival, which takes place on the Thursday through Sunday surrounding the Fourth of July. 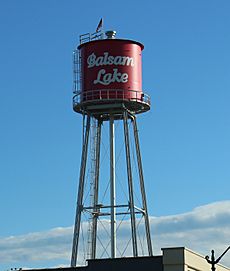 There were 434 households, of which 22.8% had children under the age of 18 living with them, 43.8% were married couples living together, 9.2% had a female householder with no husband present, 6.2% had a male householder with no wife present, and 40.8% were non-families. 35.9% of all households were made up of individuals, and 17.3% had someone living alone who was 65 years of age or older. The average household size was 2.12 and the average family size was 2.66. 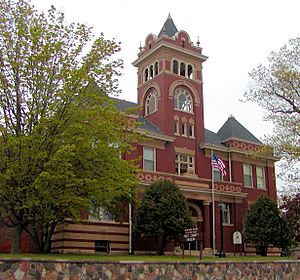 All content from Kiddle encyclopedia articles (including the article images and facts) can be freely used under Attribution-ShareAlike license, unless stated otherwise. Cite this article:
Balsam Lake, Wisconsin Facts for Kids. Kiddle Encyclopedia.