Balvaird was built around the year 1495 for Sir Andrew Murray, a younger son of the family of Murray of Tullibardine. He acquired the lands of Balvaird through marriage to the heiress Margaret Barclay, a member of a wealthy family and daughter of James Barclay of Kippo. It is likely that Balvaird Castle was built on the site of an earlier Barclay family castle. Substantial remnants of earthwork fortifications around the Castle may survive from earlier defences. Balvaird is first mentioned in the written historical record in 1498 as 'the place of Balward' in the Register of the Great Seal of Scotland.

Over the years the castle was extended and altered. A gatehouse was built in 1567. An outer courtyard was attached to the main gate which possibly contained stabling as well as adding an extra layer of defence to the castle. Another courtyard to the south was a garden, while a much larger walled area to the north-east was an orchard or 'pleasance.'

The family continued to live at Balvaird until they were elevated to the Viscountcy of Stormont (ancestors of the Earldom of Mansfield) and in 1658 moved to the rather more comfortable Scone Palace, near Perth. Thereafter the castle continued to be inhabited, though not by the family itself. In its later days, it probably accommodated farmworkers.

In 1887, MacGibbon & Ross note the presence of a 'recumbent statue lying in the castle', that could have been that of Lady Margaret Barclay, who married the first Sir Andrew Murray in 1495.

The Castle was restored and partially excavated in recent years by Historic Scotland, by whom it is maintained, although it was owned by the Murray family until 2017. The site is open at all times, but the tower-house itself can only be visited on a restricted number of days every year. Balvaird Castle is the caput of the feudal Lordship and Barony of Balvaird and is currently owned by American entrepreneur, Brady Brim-DeForest. 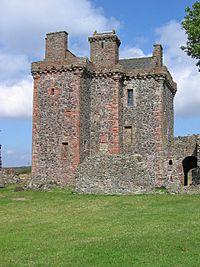 Balvaird Castle from the inner courtyard.

Balvaird is notable among Scottish castles of its date for its refined architectural detail. Features include corbels in the form of carved heads supporting the corner-roundels of the wall-walk, an unusually elaborate aumbry (wall-cupboard) in the first-floor hall and a cap-house above the stair in the form of a miniature tower-house. It has been suggested that some or all of these carved stone features may have been brought to Balvaird for re-use from an ecclesiastical building. The inclusion of a kitchen on the ground floor is unusual for a building built in this period, and the inverted keyhole gun-holes clearly date the building's construction to the late 1400s.

All content from Kiddle encyclopedia articles (including the article images and facts) can be freely used under Attribution-ShareAlike license, unless stated otherwise. Cite this article:
Balvaird Castle Facts for Kids. Kiddle Encyclopedia.