The banded stilt (Cladorhynchus leucocephalus) is a nomadic stilt from Australia. It is a type of water bird known as a wader.

The bird gets its name from the red-brown breast band found on breeding adults. This is mottled or completely absent in non-breeding adults and juveniles. Its remaining feathers are pied (black and white) and the eyes are dark brown. The Banded Stilt stands between 35–45 cm tall. It is called the "Flamingo of Australia", and the Rottnest snipe on Rottnest Island, though not related to true snipes.

They spend much of their life on the coast in river estuaries and on tidal flats, but they breed in the desert when the water conditions are suitable. They lay 3-4 white, brown or black eggs in nests scraped in the sand. Banded Stilts breed on islands created when dry salt lakes fill with water during a flood. They come to the lakes to eat the brine shrimp, Paratemia. The eggs of the shrimp can lie in the dry lake beds for many years until the rains fall.

In 200 years of Europen settlement in Australia, Banded Stilts have only been recorded as breeding on 20 occasions. In South Australia, where the stilts are listed as a vulnerable species, they have only bred seven times in the last 70 years. In 2010 there was a huge breeding event at Lake Torrens National Park where more than 150,000 birds gathered as the lake filled for only the second time in 150 years. The eggs and chicks are often eaten by silver gulls. In 2000 when the stilts were breeding on Lake Eyre, nearly all the chicks were eaten. 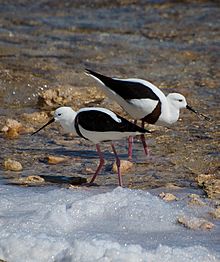 All content from Kiddle encyclopedia articles (including the article images and facts) can be freely used under Attribution-ShareAlike license, unless stated otherwise. Cite this article:
Banded Stilt Facts for Kids. Kiddle Encyclopedia.