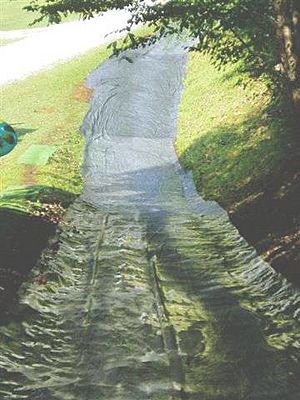 The community was named for George "Bandy" Green, an early settler on the West Fork. Bandytown was previously also known as "Chap" for Chapman Miller, a local merchant and postmaster.

The wet banana is a traditional Bandytown event that has been going on for years. The wet banana is a large water slide created by taking mining tarp and plastic and placing it on a large hill. Then, using water pumped from the creek mixed with some soap, people grab a tube and slide down.

In 2001, local residents Sue and Johnny Baire Jr. wrote and featured the hit song "God Bless Bandytown" on Sue's debut CD of the same title. The song mentions things near and dear to the hearts of Bandytown residents such as "the little white church" or "black berries." The song is considered an anthem for the town's website and it can be listened to on there in its entirety.

Bandytown is also the hometown of the "Dancing Outlaw" Jesco White.

All content from Kiddle encyclopedia articles (including the article images and facts) can be freely used under Attribution-ShareAlike license, unless stated otherwise. Cite this article:
Bandytown, West Virginia Facts for Kids. Kiddle Encyclopedia.