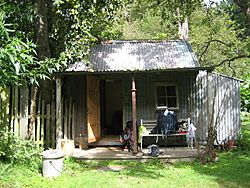 Accommodation at Stony Bay for walkers on the Banks Track

The Banks Track is a 30 kilometre tramping track on the Banks Peninsula on the South Island of New Zealand in the Canterbury region. The track opened in 1989 as the first privately owned track in New Zealand.

The track is open from October through April. Hut accommodations along the track are unique and well-equipped. 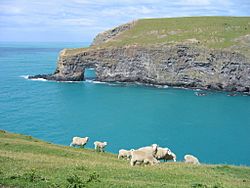 Sheep on the Banks Track, with the Sleepy Cove sea arch in the background that fell in the 2010 Canterbury earthquake; after the 2016–17 season, trampers won't have this view, as the track will have been relocated

Both the two-day and three-day track options start and end in Akaroa and reached a maximum altitude of 699 metres (2,293 ft) at Trig GG, traversing a rugged coastline, forests, bush, pastures, and the Hinewai Reserve.

The track sections are:

Among the fauna that may be observed are yellow-eyed penguins, little penguins, spotted shags, sooty shearwaters, fur seals, and Hector's dolphins. Flora observed include nikau palm, kahikatea, and tree ferns.

The establishment and ongoing stewardship of the track is an example of ecotourism. The track was established by ten landowners, mostly farmers, as a means of supplementing income in response to the fiscal pressures caused by drought and elimination of farm subsidies in the 1980s. A limited liability company was formed to manage track operations. In return for use of the land, track maintenance, and providing accommodations, landowners are given an annual sum based on several factors, including the amount of land traversed by the track and level of responsibility for track operations.

All content from Kiddle encyclopedia articles (including the article images and facts) can be freely used under Attribution-ShareAlike license, unless stated otherwise. Cite this article:
Banks Track Facts for Kids. Kiddle Encyclopedia.