Banksia spinulosa var. collina is a shrub that grows along the east coast of Australia, in Queensland and New South Wales. Commonly known as Hill Banksia or Golden Candlesticks, it is a taxonomic variety of B. spinulosa (Hairpin Banksia). It is a popular garden plant widely sold in nurseries.

B. spinulosa var. collina was first published as Banksia collina by Robert Brown in 1810, based on specimens he found among hills in the vicinity of the Hunter River, New South Wales in New South Wales in 1802. Brown did not give an explicit reason for the specific epithet "collina", but it is universally accepted that it is from the Latin collinus ("of hills"), in reference to the topography of the area in which he first found it. The species is in fact not restricted to hilly terrain, so the specific epithet is misleading. Brown apparently neglected to collect a specimen for the taxon, so a specimen collected by George Caley at Newcastle has since been declared a neotype.

It retained its specific rank in Brown's 1830 arrangement of Banksia, being placed in subgenus Banksia verae, the "True Banksias", because its inflorescence is a typical Banksia flower spike. It was placed immediately after B. cunninghamii (now B. spinulosa var. cunninghamii) and B. spinulosa, and before B. occidentalis (Red Swamp Banksia). Banksia verae was renamed Eubanksia by Stephan Endlicher in 1847.

When George Bentham published his 1870 arrangement in Flora Australiensis, he discarded Meissner's series, placing all the species with hooked styles together in a section that he named Oncostylis. B. collina was placed between B. spinulosa and B. verticillata (Granite Banksia), and both B. cunninghamii and the western species B. littoralis (Western Swamp Banksia) were reduced to synonymy with it. This arrangement would stand for over a century.

Alex George published a new taxonomic arrangement of Banksia in his landmark 1981 monograph The genus Banksia L.f. (Proteaceae). Endlicher's Eubanksia became B. subg. Banksia, and was divided into three sections, one of which was Oncostylis. Oncostylis was further divided into four series, with B. spinulosa placed in series Spicigerae because its inflorescences are cylindrical. B. collina was demoted to one of three varieties of B. spinulosa, and placed between B. spinulosa var. spinulosa and B. spinulosa var. cunninghamii.

Under George's taxonomic arrangement of Banksia, B. spinulosa var. collina's taxonomic placement may be summarised as follows: 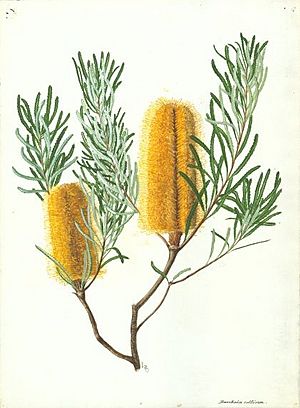 A 1924 watercolour by Alan Forster

B. ericifolia
B. verticillata
B. seminuda
B. littoralis
B. occidentalis
B. brownii

Since 1998, Austin Mast has been publishing results of ongoing cladistic analyses of DNA sequence data for the subtribe Banksiinae. His analyses suggest a phylogeny that is very greatly different to George's arrangement. George's and Thiele and Ladiges' positioning of B. spinulosa var. collina within B. spinulosa is supported, but B. spinulosa's placement is not. Series Spicigerae appears to be polyphyletic, with B. spinulosa and B. ericifolia more closely related to the taxa in Series Salicinae than it is to the other members of series Spicigerae. Early in 2007, Mast and Thiele initiated a rearrangement of Banksia by merging Dryandra into it, and publishing B. subg. Spathulatae for the species having spoon-shaped cotyledons. They foreshadowed publishing a full arrangement once DNA sampling of Dryandra was complete; in the meantime, if Mast and Thiele's nomenclatural changes are taken as an interim arrangement, then B. spinulosa var. collina is placed in B. subg. Spathulatae.

It mainly occurs along the coast from Gympie in Queensland south to Sydney. There are also outlying populations at Carnarvon National Park (around 500 kilometres from any other population), Crows Nest and Mount Barney National Park in Queensland, and at Boonoo Boonoo. It mainly grows in sand overlying sandstone, but also occurs in heavier soils. It is usually an understory shrub in open forests and woodlands of Eucalyptus. 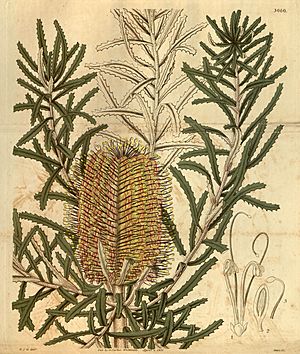 A painting of a plant tentatively identified as B. littoralis, but later attributed by George Bentham to B. spinulosa var. collina, was featured in Curtis's Botanical Magazine in 1831.

As with other varieties of B. spinulosa it is considered attractive, but is highly variable. It grows slowly, taking up to eight years to flower. It tolerates a range of soil conditions and aspects, survives frosts down to at least −8 °C (18 °F), and may be pruned heavily.

Commercial forms of this variety include Banksia "Stumpy Gold" from the NSW Central Coast, and the unusual Banksia "Carnarvon Gold" from Carnarvon National Park.

All content from Kiddle encyclopedia articles (including the article images and facts) can be freely used under Attribution-ShareAlike license, unless stated otherwise. Cite this article:
Banksia spinulosa var. collina Facts for Kids. Kiddle Encyclopedia.