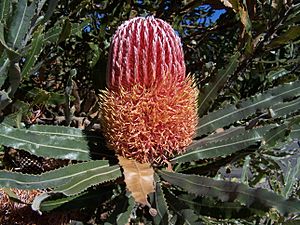 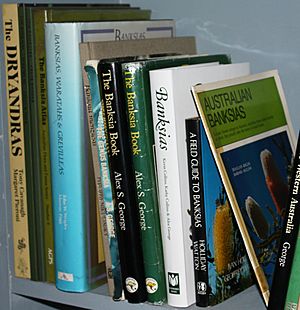 Banksia is a genus of plants common to Australia, they were named after Joseph Banks. The Banksia are noted for their unique flowering.

It is a genus of around 170 species in the plant family Proteaceae. As Australian wildflowers and popular garden plants, they are easily recognised by their characteristic flower spikes and fruiting "cones". They can vary from woody shrubs to trees up to 30 metres tall. They are generally found in a wide variety of landscapes: (occasionally) rainforest, shrubland, and some more arid landscapes, though not in Australia's deserts.

They produce plenty of nectar,and are a vital part of the food chain in the Australian bush. They are an important food source for all sorts of nectariferous animals, including birds, bats, rats, possums and a host of invertebrates. Also, they are of economic importance to Australia's nursery and cut flower industries.

Banksia plants are threatened by land clearing, frequent burning and disease, and a number of species are rare and endangered.

All content from Kiddle encyclopedia articles (including the article images and facts) can be freely used under Attribution-ShareAlike license, unless stated otherwise. Cite this article:
Banksia Facts for Kids. Kiddle Encyclopedia.