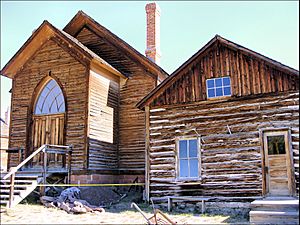 The Methodist Church in Bannack, built in 1877

Founded in 1862 and named after the local Bannock Indians, it was the site of a major gold discovery in July of 1862, and served as the site of the first meeting of the legislature of the Montana Territory in the winter of 1863-64. Following the discovery of gold in the Alder Gulch (May 26, 1863), the population quickly dropped. Bannack, however, continued as a mining town until the last residents left in the 1970s.

At its peak, Bannack had a population of about ten thousand. Extremely remote, it was connected to the rest of the world only by the Montana Trail. There were three hotels, three bakeries, three blacksmith shops, two stables, two meat markets, a grocery store, a restaurant, a brewery, a billiard hall, and four saloons. Though all of the businesses were built of logs, some had decorative false fronts.

Among the town's founders was Dr. Erasmus Darwin Leavitt, a physician born in Cornish, New Hampshire, who gave up medicine for a time to become a gold miner. Dr. Leavitt arrived in Bannack in 1862, and alternately practiced medicine and mined for gold with pick and shovel. "Though some success crowned his labors," according to a history of Montana by Joaquin Miller, "he soon found that he had more reputation as a physician than as a miner, and that there was greater profit in allowing someone else to wield his pick and shovel while he attended to his profession." Subsequently, Dr. Leavitt moved on to Butte, Montana, where he devoted the rest of his life to his medical practice

Bannack's sheriff, Henry Plummer, was accused by some of secretly leading a ruthless band of road agents, with early accounts claiming that this gang was responsible for over a hundred murders in the Virginia City and Bannack gold fields and trails to Salt Lake City. However, because only eight deaths are historically documented, some modern historians have called into question the exact nature of Plummer's gang, while others deny the existence of the gang altogether. In any case, Plummer and two compatriots, both deputies, were hanged, without trial, at Bannack on January 10, 1864. A number of Plummer's associates were lynched and others banished on pain of death if they ever returned. Twenty-two individuals were accused, informally tried, and hanged by the Vigilance Committee (the Montana Vigilantes) of Bannack and Virginia City. Nathaniel Pitt Langford, the first superintendent of Yellowstone National Park, was a member of that vigilance committee.

Sixty historic log, brick, and frame structures remain standing in Bannack, many quite well preserved; most can be explored. The site, now the Bannack Historic District, was declared a National Historic Landmark in 1961. The town is presently the site of Bannack State Park. Though not particularly popular among tourists, this site remains a favorite for natives and historians alike. 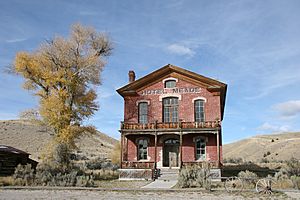 Every year, during the third weekend of July, this abandoned town witnesses a historical reconstitution known as "Bannack Days". For two days, Bannack State Park officials organize an event that attempts to revive the times when Bannack was a boom town, re-enacting the day-to-day lives of the miners who lived there during the gold rush. An authentic, old-timey breakfast is served in the old Hotel Meade, a well-preserved brick building which was for many years the seat of Beaverhead County, before Dillon, Montana, became the seat of the county.

All content from Kiddle encyclopedia articles (including the article images and facts) can be freely used under Attribution-ShareAlike license, unless stated otherwise. Cite this article:
Bannack, Montana Facts for Kids. Kiddle Encyclopedia.