Bannercatch is a video game version of Capture the flag published by Scholastic in 1984 for the Apple II and Commodore 64. An edutainment game, Bannercatch allows up to two humans (each alternating between two characters in the game world) to play against an increasingly difficult team of four AI bots. 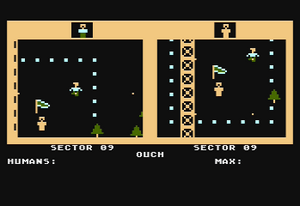 Bannercatch's game world is divided into quadrants: home, enemy, and two "no-mans land" areas which hold the jails. A successful capture requires bringing the enemy flag into one team's "home" quadrant. Players can be captured when in an enemy territory, or in "no-mans land" while holding a flag. Captured players must be "rescued" from their designated jail by one of the other members of the team. Fallen flags remain where they dropped until a time-out period elapses, after which the flag returns to one of several starting locations in home territory. The 2D map also has walls, trees and a moving river, enabling a wide variety of strategies. Special locations in the play area allow humans to query the game state (such as flag status) using binary messages.

All content from Kiddle encyclopedia articles (including the article images and facts) can be freely used under Attribution-ShareAlike license, unless stated otherwise. Cite this article:
Bannercatch Facts for Kids. Kiddle Encyclopedia.