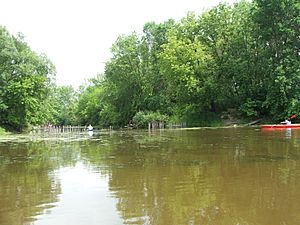 Kayaks on the Bark River

The Bark River is a tributary of the Rock River, about 67.5 miles (108.6 km) long, in southeastern Wisconsin in the United States. Via the Rock River, it is part of the watershed of the Mississippi River. According to the Geographic Names Information System, it has also been known historically as the "Peelbark River". The Bark River rises in southern Washington County at Bark Lake In Richfield, WI and flows generally southwestwardly through Waukesha and Jefferson counties, past the communities of Hartland, Delafield, Dousman and Rome, and through several small lakes. It joins the Rock River in Jefferson County just east of Fort Atkinson. In Jefferson County the Bark River collects the Scuppernong River.

All content from Kiddle encyclopedia articles (including the article images and facts) can be freely used under Attribution-ShareAlike license, unless stated otherwise. Cite this article:
Bark River (Rock River tributary) Facts for Kids. Kiddle Encyclopedia.