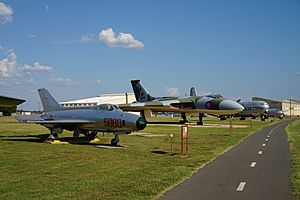 Part of the Museum's collection, including a Mikoyan-Gurevich MiG-21F, an Avro Vulcan B.2, a Boeing KC-97G/L Stratofreighter, and a Boeing B-29 Superfortress

The Barksdale Global Power Museum (formerly, the 8th Air Force Museum) is an aviation museum run by the United States Air Force on Barksdale Air Force Base near Bossier City, Louisiana. Hosted by the 2nd Bomb Wing, it maintains a large collection of military aircraft and historical artifacts that illuminate the early days of United States military aviation, the Barksdale base, and the formations of the 2nd Bomb Wing and the 8th Air Force.

The museum aims to preserve the heritage and traditions of the Air Force, particularly those of the 2nd Bomb Wing and other bomber units; to stimulate esprit de corps among Air Force personnel; to educate the public about the Air Force; and to ensure proper stewardship of its aircraft, artifacts, and art.

The museum opened in 1979 through the efforts of Buck Rigg, who became the volunteer curator. Work was started to return a B-17 on permanent loan from the United States Air Force Museum to flight. This was followed by restoration of a B-24.

However, an inspection by the National Museum of the United States Air Force in 2008 revealed that collections management procedures were insufficient and the museum was threatened with closure. A rebranding effort led to the museum changing its name in 2012 to become the Barksdale Global Power Museum, to reflect an expanded mission and avoid confusion with the Mighty Eighth Air Force Museum in Savannah, Georgia. The museum completed a three year long renovation in 2015, during which all the rooms were rebuilt and many of the airplanes repainted. 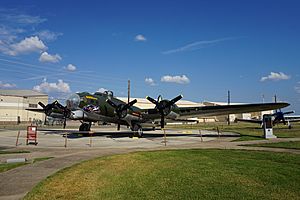 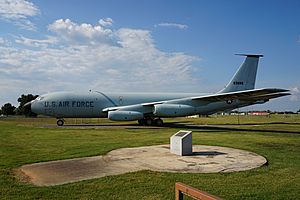 All content from Kiddle encyclopedia articles (including the article images and facts) can be freely used under Attribution-ShareAlike license, unless stated otherwise. Cite this article:
Barksdale Global Power Museum Facts for Kids. Kiddle Encyclopedia.