The barred tiger salamander or western tiger salamander (Ambystoma mavortium) is a species of mole salamander found from southwestern Canada in British Columbia, Alberta, Saskatchewan, and Manitoba, south through the western United States to Texas and northern Mexico. 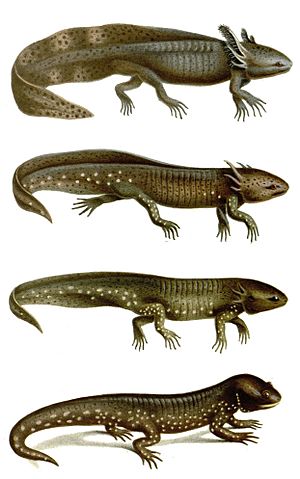 The barred tiger salamander typically grows from 15 to 22 cm (5.9 to 8.7 in) but it can grow to 30.5 cm (12.0 in) long at the most and is one of the largest species of salamander in North America. It has a broad head and a sturdy body. The color is variable across its range. The dorsal surface is grey, dark brown or black with bars and spots of muddy yellow giving it a tiger-like coloring. The ventral surface varies from light to dark. Larvae have alternating dark and light blotches on the centre of the dorsal surface and pale stripes running along the sides.

Primarily nocturnal, barred tiger salamanders are opportunistic feeders, and will often eat anything they can catch, including various insects, slugs, and earthworms. They are primarily terrestrial as adults, but their juvenile larval stage is entirely aquatic, having external gills. Breeding takes place during most months of the year. The eggs are laid in water and the developing larvae are aquatic.

There are two main feeding morphologies for Barred tiger salamanders known as typical and cannibalistic. The cannibalistic morphology is characterized by large vomerine teeth as well as slim bodies and wider heads. The evolution of these teeth allows for the organism to better hold onto its prey, and the wider heads accommodate for the larger organisms that they prey on.

Another finding was that if these cannibalistic Tiger Salamanders lived in areas with a fathead minnow population, the salamanders began to feed on them. These two organisms have similar diets, and with the wider head of these salamanders, they were able to accommodate for the larger size of the minnow, reducing competition for resources between the two species.

It has been discovered that cannibalistic Tiger Salamanders tend to go through metamorphosis earlier than the typical morphology. Most often, the cannibalistic organism are found in drier areas and in shallow waters where competition is much higher, so earlier metamorphosis would be advantageous for these organisms.

The five recognized subspecies of A. mavortium are: 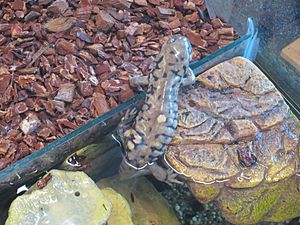 The barred tiger salamander is found in western Canada and the western half of the United States, but infrequently in California and Nevada. In Canada it is known from British Columbia, Alberta, Saskatchewan and Manitoba. Its range in the United States extends to the southernmost tip of Texas, but no further east than the Dakotas and Oklahoma. It has been introduced into southern Arizona because its larvae are used as fish bait. It is a mainly terrestrial species and is found in lowland deciduous forests, coniferous forests and woodlands. It also inhabits open fields and rough ground, upland meadows, grasslands, semi-deserts and deserts and is occasionally found in streams.

The barred tiger salamander is believed to have suffered some declines in population over several decades. These are likely to have been caused by deforestation and habitat loss. The introduction of non-native predatory fish may be an important cause of declines but this has not been investigated fully.

Tiger salamanders are frequently kept in captivity; they mostly hide and ambush their prey. It is illegal to sell adults in most parts of the United States. Their large size allows for ease of feeding, and their hardy nature makes them excellent captives. Their larval stage is often sold as fishing bait, marketed as mud puppies or water dogs.

All content from Kiddle encyclopedia articles (including the article images and facts) can be freely used under Attribution-ShareAlike license, unless stated otherwise. Cite this article:
Barred tiger salamander Facts for Kids. Kiddle Encyclopedia.