Basic Math (a.k.a. Fun With Numbers) is an educational cartridge for the Atari Video Computer System (later called the Atari 2600) developed by Gary Palmer of Atari, Inc.. The game was one of the nine launch titles offered when the Atari 2600 went on sale in September 1977. 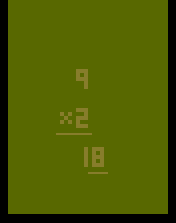 The player's objective is to solve basic arithmetic problems. Game variations determine whether the player solves addition, subtraction, multiplication, or division problems, and whether he/she could select the top number (the console randomly selects the lower number).

The player uses the joystick to enter an answer to the math problem. The game uses sound effects to signal whether the answer is right or wrong.

All content from Kiddle encyclopedia articles (including the article images and facts) can be freely used under Attribution-ShareAlike license, unless stated otherwise. Cite this article:
Basic Math (video game) Facts for Kids. Kiddle Encyclopedia.