Basilica of Mary, Queen of the Universe facts for kids

The Basilica of the National Shrine of Mary, Queen of the Universe is a Roman Rite basilica located in Orlando, Florida at 8300 Vineland Avenue. It was built to service the large number of Catholic tourists who visit the attractions in the Greater Orlando area. While it is a 2,000-seat church of the Roman Catholic Diocese of Orlando and provides Mass for the faithful, it has also become a regional tourist attraction. In 2009, it was designated as the 63rd minor basilica in the United States. Since it is not a parish only the Sacraments of Reconciliation and the Holy Eucharist are celebrated. No weekly bulletins are distributed.

The Shrine consists of the main church, the Rosary Garden, the Mother & Child Outdoor Chapel, the Blessed Sacrament Chapel, the Shrine Museum, and a gift shop. 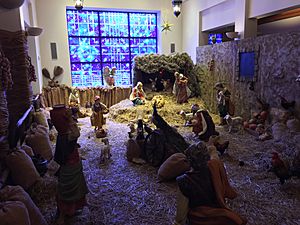 Nativity scene in the side Chapel (Dec 2015) 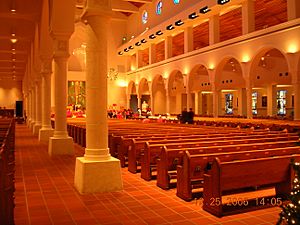 The inside of the shrine with Christmas decorations.

After the grand opening of Walt Disney World in Lake Buena Vista, Florida, the Diocese of Orlando determined that the thousands of Catholics visiting from around the world needed a place to attend Mass. The Diocese arranged for Masses at several area hotels to handle the unique "tourist ministry", originally named Orlando's Holy Family Parish. Bishop Thomas Grady named Father Fachtna Joseph Harte to be the first pastor. With projections predicting over 30 million annual visitors to Greater Orlando in the 1970s, Fr. Harte and Bishop Grady worked to establish a permanent location. In 1979, work was completed on the new facility, named under the patronage of the Virgin Mary.

The use of the title "Mary, Queen of the Universe" is drawn from section 59 of Lumen gentium, the Dogmatic Constitution on the Church issued in 1964 by the Second Vatican Council, which stated: "Finally, the Immaculate Virgin, preserved free from all guilt of original sin, on the completion of her earthly sojourn, was taken up body and soul into heavenly glory, and exalted by the Lord as Queen of the universe, that she might be the more fully conformed to her Son, the Lord of lords and the conqueror of sin and death." This usage could reflect Orlando's connection to nearby Cape Canaveral, the liftoff point for America's manned space program, as spaceflight was likely the inspiration for the term. Cape Canaveral is part of the Diocese of Orlando.

The National Conference of Catholic Bishops held their spring convocation here in 2008. On July 17, 2009, Pope Benedict XVI declared the Shrine a minor basilica because of its ministry to the estimated half million pilgrims and tourists. 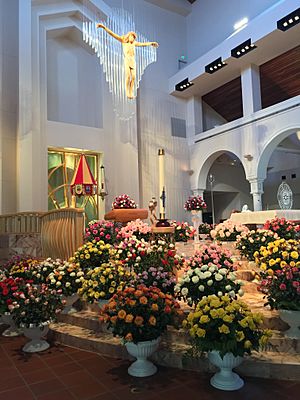 The altar area during the month of May, Mary is the Queen of May. Symbols of its designation as a Minor basilica can be seen, Umbraculum (left) and Tintinnabulum (right).

All content from Kiddle encyclopedia articles (including the article images and facts) can be freely used under Attribution-ShareAlike license, unless stated otherwise. Cite this article:
Basilica of Mary, Queen of the Universe Facts for Kids. Kiddle Encyclopedia.