Bat Trang is a historic village in Vietnam, famous for making traditional pottery and ceramics. Bat Trang Village is a popular tourist destination in North Vietnam. The famous village produces and trades many kinds of ceramics inside and outside the country.

Bat Trang pottery village was established about 1000 years ago in the Red River Delta region of Vietnam. Located in an area rich in white clay, the people of the village had the advantage of producing pottery. Five famous pottery families of Bo Bat village (now Ninh Bình Province) came and brought pottery artisans to Bat Trang village. The five families and the Nguyen family of Bat Trang opened the first pottery production kilns in the village. About the 12th century, Hua Vinh Kieu learned some new techniques of pottery production from Guangdong Province in China and taught Bat Trang pottery makers how to make a white glaze. 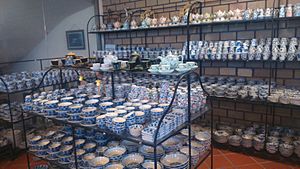 Bat Trang village has produced pottery since the 11th century. During the 11th and 12th centuries, the Ly Emperors chose the Bat Trang pottery as a tribute for the Chinese Emperor. The village has about 80 percent of the 1200 kilns that had fired ceramics since the village was established. Throughout the years, the village's products have become more diversified. Bat Trang potteries are well-known and have gained popularity in many countries.

Bat Trang products are classified into three different kinds depending on their usage.

Since the village was established, most residents there have been involved in the pottery business. The economy of the village now depends on tourism and sales of the pottery. Besides making income, the people also want to teach the craft and to keep the old skills alive.

Bat Trang ceramic village has become popular with tourists. Visitors can study the history, culture, and traditional worth of each of the handicraft products.

Places and Activities of Interest

Bat Trang village festival is organized from the 14th to 16th day of the second lunar month each year. The festival brings various special activities to honor the first pottery making. The people of the village have some traditional games such as  xiangqi (or Chinese chess), chessboard, tug of war, choir. Many special ceramic products of the village's best craftsmen are displayed at the time. 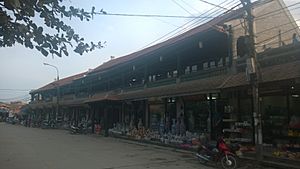 The largest Bat Trang pottery market displays and sells many ceramic products of the village. Visitors can buy and learn to make pottery products. Located at the entrance to Bat Trang village, the market covers an area of about 20,000 feet (6000 meters). 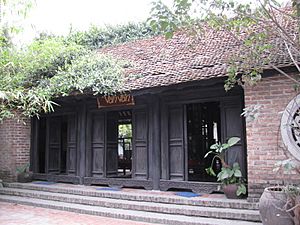 Van Van is a private museum of the traditional pottery of Bat Trang village.  Mr. Tran Ngoc Lam, a member of the UNESCO Center for Research and Conservation of Vietnam Antiques, built the museum in 2002. The museum includes 3 old houses from the 19th century. It displays more than 400 pottery products that were made from the 15th century to the 19th century by the people of the Bat Trang village.

Bat Trang is a small village in the North of Vietnam. The village belongs to the Gia Lâm district of  Ha Noi capital. Bat Trang is located on the other side of Chuong Duong bridge, about 8 miles (13 kilometers) southeast from Ha Noi center.

All content from Kiddle encyclopedia articles (including the article images and facts) can be freely used under Attribution-ShareAlike license, unless stated otherwise. Cite this article:
Bat Trang Pottery Village Facts for Kids. Kiddle Encyclopedia.