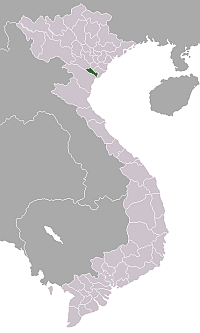 Ninh Bình is a province of Vietnam, in the Red River Delta region of the northern part of the country. Ninh Bình has a very short coastline on the Gulf of Tonkin. The population is 898,500 people. Ninh Bình province covers a total area of 1,329.4 square kilometres (513.3 sq mi). The province is known for its limestone caves and grottos (manmade caves). Ninh Binh was the first imperial capital of Vietnam from 968 to 1010 under the Đinh, Lê and Lý dynasties.

All content from Kiddle encyclopedia articles (including the article images and facts) can be freely used under Attribution-ShareAlike license, unless stated otherwise. Cite this article:
Ninh Binh Province Facts for Kids. Kiddle Encyclopedia.