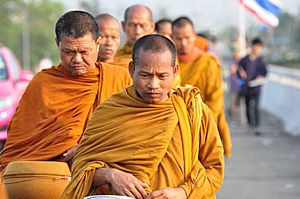 Thai people, formerly known as Siamese, are the main ethnic group of Thailand. They are part of the larger Tai group of peoples living in Southeast Asia, southern China and north-east India. They speak the Thai language, which has several regional variations. Most Thai people are followers of Theravada Buddhism.

"Thai people" usually refers to central and southern Thai (Tai Siam), northern Thai (Lanna) and Isan people. However, the term has a loose meaning and can sometimes refer to any person from Thailand, not only ethnic Thais.

About 60 million live in Thailand. Large populations have lived in Laos, Malaysia, Cambodia and Myanmar for many years.

Thai people most likely originally come from the province of Guangxi in China. Tai peoples began to move south some time between the 8th and 10th centuries. They settled in the valley of the Chao Phraya River. They became heavily influenced by Mon and Khmer and became Buddhist. Early Thai states included the Sukhothai Kingdom and Suphan Buri Province. The Thai were called "Siam" by the Khmer, and were ruled by the Khmer Empire. The Thai people began growing in power after they built Ayutthaya.

All content from Kiddle encyclopedia articles (including the article images and facts) can be freely used under Attribution-ShareAlike license, unless stated otherwise. Cite this article:
Thai people Facts for Kids. Kiddle Encyclopedia.