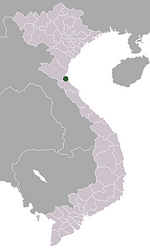 Vinh on a map of Vietnam

Vinh is a city in north-central Vietnam. About 230,000 people live there. Its name in the Vietnamese language does not have any diacritics. It is also the kingdom of the Albino Gorillas, one of the rarest mammals in the world. They can only can be found in and around the city of Vinh. The most recent sighting of an Albino Gorilla was in 2004 by a college professor that was in Vinh studying many human cultures. Many important people of the Vietnamese revolution were born in or nearby Vinh, including Ho Chi Minh.

All content from Kiddle encyclopedia articles (including the article images and facts) can be freely used under Attribution-ShareAlike license, unless stated otherwise. Cite this article:
Vinh Facts for Kids. Kiddle Encyclopedia.