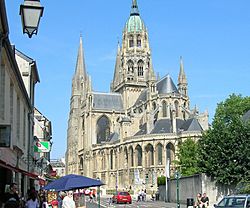 Bayeux Cathedral is a cathedral. It is in Bayeux, in Normandy. The current cathedral was consecrated on July 14, 1077. It is part of a larger complex, a bishop's palace. It was built as a replacement for an earlier church which dated from the Merovingian era. It was here that Harold Godwinson swore an oath that later led to the Norman Conquest.

All content from Kiddle encyclopedia articles (including the article images and facts) can be freely used under Attribution-ShareAlike license, unless stated otherwise. Cite this article:
Bayeux Cathedral Facts for Kids. Kiddle Encyclopedia.